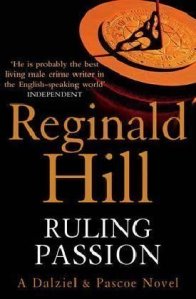 Ruling Passion is Reginald Hill’s third Dalziel and Pascoe novel, first published in 1973, in which Pascoe finds his social life and work uncomfortably brought together by a terrible triple murder. Meanwhile, Dalziel is pressuring him about a string of unsolved burglaries, and as events unfold the two cases keep getting jumbled in his mind.

Peter Pascoe is the main character with Dalziel, his boss playing a minor role. Moving on from the second book where Pascoe had renewed his relationship with Ellie Soper, they are now a couple and friends from their university days, Colin and Rose Hopkins have invited them to stay for a weekend in the country at their cottage in the village of Thornton Lacey. They hadn’t seen them for more than five years and the other guests were also old friends, Timothy Mansfield and Charles Rushworth. (References here to Jane Austen’s Mansfield Park)

However, Peter and Ellie didn’t arrive until the Saturday morning when they found a terrible scene – Timothy and Charles lying on the dining room floor in a pool of blood, dead from wounds caused by a shotgun fired at close range, and Rose was in the back garden lying dead at the base of a sundial in the centre of the lawn, her face pressed into the grass. Colin was nowhere to be seen – and the police, headed by Superintendent Backhouse, immediately assume he is the murderer. Peter for once is faced with being a witness rather than a detective and he doesn’t find it easy. He and Ellie are both convinced that Colin didn’t commit the murders – it’s a matter of finding him and proving Backhouse wrong.

As in the previous book, An Advancement of Learning, the plot is by no means straight forward and I found it rather confusing for a while, trying to remember who was who and where they fitted into the mystery. It’s not helped by the fact that the action moves between Thornton Lacey, Yorkshire and Scotland. It wasn’t only Peter who muddled the murder mystery with his unsolved burglaries – I did too. But it all became much clearer towards the end of the book as the connections between the storylines were made.

It’s the main characters though that interested me most and the development of their characters – Peter and Ellie in particular. Their relationship has moved on and during the course of the book they realise how deep their feelings for each other are – leading them into considering getting married. Peter recognises that he can be a very solitary man:

Solitariness was not far from loneliness and this he feared. He believed he could recognize similar characteristics in Ellie, but how good a basis for marriage this common area would be he could not speculate. Equally far from contemplation, however, was a life without Ellie. Which is as good a definition of love as I’m likely to get in a police station, he told himself. Motives for marriage are at least as varied and unexpected as motives for murder. That sounded like the kind of cold comfort Dalziel would doubtless offer! (page 325)

Whereas Peter and Ellie have now become more developed characters Dalziel still remains more of a caricature, rude, coarse and insensitive. But as Ellie gets to know him more so he becomes more human – and more likeable, with more understanding than she had previously thought. By the end of the book Peter, having passed his exams, is promoted to Inspector.

Reginald Hill wrote 24 Dalziel and Pascoe novels. I’ve now read the first and the last and some in between. Currently I’m reading my way through the rest of them – so book 4 is next on my list – An April Shroud.