An Advancement of Learning by Reginald Hill: Mini Review 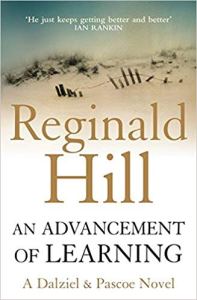 An Advancement of Learning is Reginald Hill’s second Dalziel and Pascoe novel, first published in 1971. It’s much better than the first one, A Clubbable Woman and I thoroughly enjoyed it. It’s set in a college, Holm Coultram College, where Dalziel and Pascoe investigate the discovery of a body found as an eight foot high bronze statue of Miss Girling, a former head of the College in the grounds is being moved. As the base of the statue is lifted earth falls away together with a shin bone followed by part of a rib cage and then a skull, still with a mop of dark red hair attached. Miss Girling had red hair – but she had died in an avalanche in Austria – so whose body was buried under the statue?

The plot is by no means straight forward and for most of the book continued to puzzle me, even though I thought the ending was rather weak. But the strength of this book is in the writing and the characterisation. It is a character-driven murder mystery, with a cast of characters including Girling, Halfdane, Fallowfield, Cockshut, and Disney, known as ‘Walt’, of course and I had no difficulty in keeping who was who clearly in my mind. It’s interesting to see the early relationship between Dalziel, shown as a rude, boorish character, and Pascoe, the university educated young DS. Dalziel is very much out of his comfort zone with the academic staff and looks to Pascoe to understand how the college operates, whilst mocking him. Pascoe renews his relationship with Ellie Soper, an ex-girlfriend from his university days – a feisty young woman, but a minor character in this book.

Written in 1971 it is very much a book of its time. I read it quickly, as the two detectives uncover plenty of disagreements and power struggles in both the staff and student bodies – from rivalries to revelries on the beach, and more dead bodies turn up before the mystery is solved.

And reading it has made me keen to get on the next book in the series, Ruling Passion, which I’ve started almost straight away! I’ve been reading this series totally out of order, beginning with some of the later books – much more detailed and complex than the first books.