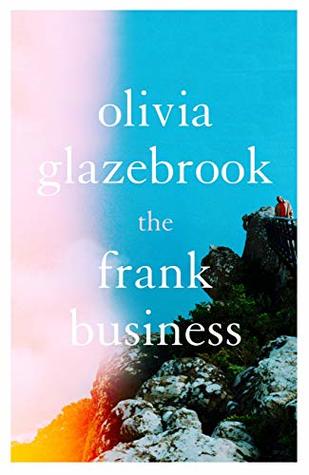 I enjoyed The Frank Business by Olivia Glazebook very much. It’s about a rather dysfunctional family in crisis and it begins dramatically:

Frank dropped down dead on Christmas Eve at four minutes past midday. He died alone – alone in a crowded mass of travelling humans – and underneath a big yellow sign: Bus  Train  Underground  Taxi  Cashpoint  Toilets  Tickets  Information  Help. He fell to the ground in the grip of a dreadful agony; his heart, to all intents and purposes, was splitting in two.

He died at London Heathrow airport, having travelled from his home in France. His next of kin is his estranged daughter Jem, who hadn’t seen him or had any contact with him since she was a child.  Trying to find out why he was at Heathrow, she travelled to Frank’s house and discovers that she was not an only child as she had believed, because Frank had also had a son. She finds his name and address on Frank’s laptop and as Frank had died of a congenital heart defect, she decides that she has to warn her half-brother that he may have inherited the defect. But this results in chaos for his son’s family as secrets from the past come to light.

At first I liked Frank, an illustrator. He had been listening to a performance of Hamlet on the radio and was astonished to find that Kathleen Griffin was playing Gertrude with her son Scott playing the role of Hamlet. He had had a brief affair with Kathleen years earlier and on googling Scott he realises that they look so alike that he must be his son. He decides he must see Kathleen to discover the truth.

It quickly becomes clear that Frank is not the nice man I had first imagined – he’s a violent, cruel man, capable of abusive and despicable behaviour. Just what is the truth? What had happened in the past – why hadn’t Jem, a young woman of 26, not seen Frank since she was a small child and why was she brought up by a guardian, Marian, who had been her mother’s nanny?Scott, known to his family as Sonny, had no idea that Walter was not his biological father and the whole family find it almost impossible to come to terms with their situation.

I’m not going into any more detail about the plot, other than to say that the whole sad story is revealed as Kathleen remembers the past and her affair with Frank. It’s well written and had me gripped right to the end. The characters are all flawed in one way or another and come across as real people. I read it quickly, keen to find out how they sorted out the mess this has made of all their lives and my only criticism is that the ending seems a bit rushed and I think it wraps everything up a bit too neatly.

Olivia Glazebrook studied English Literature at University College London and has written as a journalist, screenwriter, film critic and book critic for fifteen years. The Frank Business is her third novel. Her earlier books are The Trouble With Alice (2011) and Never Mind Miss Fox (2014).

My thanks to the publishers, John Murray Press, for my review copy via NetGalley.

2 thoughts on “The Frank Business by Olivia Glazebrook”