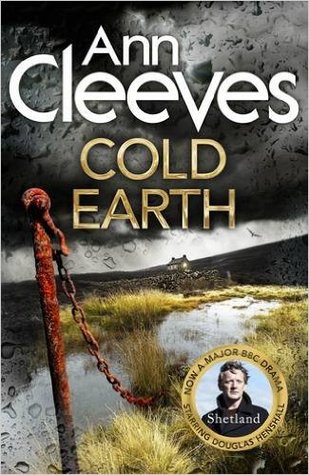 In the dark days of a Shetland winter, torrential rain triggers a landslide that crosses the main Lerwick-Sumburgh road and sweeps down to the sea.

At the burial of his old friend Magnus Tait, Jimmy Perez watches the flood of mud and peaty water smash through a croft house in its path. Everyone thinks the croft is uninhabited, but in the wreckage he finds the body of a dark-haired woman wearing a red silk dress. In his mind, she shares his Mediterranean ancestry and soon he becomes obsessed with tracing her identity.

Then it emerges that she was already dead before the landslide hit the house. Perez knows he must find out who she was, and how she died.

I loved the first 6 books in the Shetland series and Cold Earth is no exception. It works on all levels – a murder mystery to solve, with beautiful descriptions of the landscape, conveying a real sense of place, convincing characters with realistic dialogue, a well paced plot and above all a writing style that doesn’t intrude on the story, but leads you to keep on turning the pages from the beginning to the end. I featured this book in this My Friday post, quoting the opening sentence and a teaser from page 56.

The dead woman’s identity puzzles everyone on the island, although one person must know who she is as among the things found in the debris left in the croft is an unsigned letter addressed to Alis saying what a joy it is to welcome her back to the island.  Perez felt her exotic appearance and black hair and eyes could indicate that like him she was of Spanish descent. He and Sandy Wilson, his sergeant are joined by Chief Inspector Willow Reeves (originally from the Hebrides) from the Inverness team to head up the investigation. Perez is both troubled and distracted by her, but realises just how much he wants her to be in Shetland with him running the investigation.

As usual Perez works very much on his own, but Sandy is gaining more confidence in his detecting skills and helped by Perez he makes a valuable contribution, as they eventually discover the identity of the dead woman, why she was on the island and why she was killed.

If you haven’t read any of the Shetland books, but have seen the TV series, you’ll notice that there are some significant changes – notably in the characters of Cassie, Fran’s daughter who is still a child in the books but has grown up in the TV stories, and the relationship between her father, Duncan Hunter and Perez. And Douglas Henshall, who plays the part of Perez, is not physically like Jimmy Perez – Perez has long dark hair with Spanish ancestry in his blood, whereas Douglas Henshall is a redheaded Scot.

The Shetland Series – the books read well as stand-alones, but I think it’s better to read them in order as you can then follow the development of the main characters.: