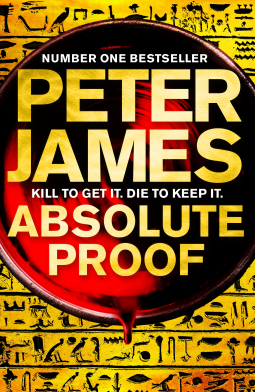 Investigative reporter Ross Hunter nearly didn’t answer the phone call that would change his life – and possibly the world – for ever. ‘I’d just like to assure you I’m not a nutcase, Mr Hunter. My name is Dr Harry F. Cook. I know this is going to sound strange, but I’ve recently been given absolute proof of God’s existence – and I’ve been advised there is a writer, a respected journalist called Ross Hunter, who could help me to get taken seriously.’

What would it take to prove the existence of God? And what would be the consequences?

This question and its answer lie at the heart of Absolute Proof, an international thriller from bestselling author Peter James.

The false faith of a billionaire evangelist, the life’s work of a famous atheist, and the credibility of each of the world’s major religions are all under threat. If Ross Hunter can survive long enough to present the evidence . . .

Absolute Proof is a long book and at times I struggled to carry on reading as, although for the most part it is fast-paced, it is slow going in parts. And it certainly tested my ability to suspend my disbelief several times. I’ve only read two of Peter James’ books previously, both crime fiction set in Brighton featuring Detective Superintendent Roy Grace. Absolute Proof is a standalone thriller and is very different from the Roy Grace books. It has similarities to Dan Brown’s The Da Vinci Code, as the search is on for proof of  God’s existence.

Ross Hunter is married to Imogen and they are expecting their first child – however he has serious doubts about his marriage and suspects Imogen of cheating on him. The story of their marriage unfolds, underlying the main plotline.  Dr Harry  F Cook, a former RAF officer and  retired history of art professor, contacts Ross and drip feeds him information that Cook claims proves that God exists.

The grid references Cook gives Hunter takes him to various places including Glastonbury, where he visits the Chalice Well in search of the Holy Grail, and Egypt in search of Queen Hatshepsut’s Temple. All the time he is in danger of death as he is pursued by those who do not want Cook’s claims to be made public. It’s a dramatic and hair-raising story that made me want to know what happened next at the same time as it made me question its credibility. It is certainly thought provoking and entertaining.

One of the things that intrigued me was that in his Acknowledgements Peter James explains that the book began with a phone call he received in 1989 from someone who did indeed claim that he had been given absolute proof of God’s existence and that he had been given Peter James’s name as an author who would help him to get taken seriously. This started James’s ‘journey of exploration into what might be considered absolute proof – and just what the consequences might be.’ During the intervening years he has talked to many people from different faiths and had discussions with scientists, academics, theologians and clerics. He has certainly done his research and gives a long list of the people who have helped him, plus a list of his sources of reference, giving me yet more details of books I’d like to read.

Thanks to Pan Macmillan and NetGalley for provided a review copy of this book.

One thought on “Absolute Proof by Peter James”