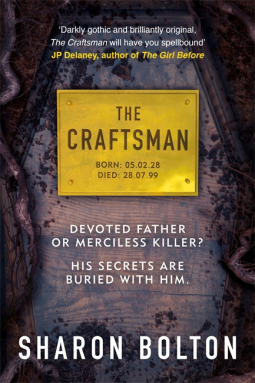 Larry confessed to the crimes; it was an open and shut case. But now he’s dead, and events from the past start to repeat themselves.

It’s been a while since I read one of Sharon Bolton’s books, so I was looking forward to reading her latest book – The Craftsman. I must admit that I was a bit dismayed when I realised that most of it is written in the present tense, but as soon as I began reading I was immediately drawn into the story, forgot about the tense, and just had to read on.

This is one of her standalone books and I have found each one really scary, creepy books and The Craftsman is no exception. In 1969 WPC Florence, ‘Flossie’, Lovelady began to work in Sabden, a small town in Lancashire under the shadow of Pendle Hill, notorious for witch trials back in the 17th century. But the book begins in 1999 when Florence, now an Assistant Commissioner returns to Sabden for the funeral of Larry Glassbrook who died after thirty years in prison, convicted for the murders of three teenagers buried alive in 1969. Taking her fifteen year old son Ben with her, she goes to Larry’s house where she had lodged and discovers a clay effigy similar to the ones found buried with the three teenagers. She revisits the scenes of the burials, meets some of her old colleagues and starts to think that maybe Larry wasn’t the murderer after all.

And so the nightmare begins, going back to 1969 as Flossie, a clever young woman, found it hard to be taken seriously at first by her colleagues in the police. And she was aware of how different she seemed to the local people in a place still steeped in superstition and belief in the supernatural. Her investigations, looking for connections between the victims, ad exploring the local history of witches and their covens raised an atmosphere of suspicion and near hysteria in the community.

Sharon Bolton’s writing is so descriptive, both of the beautiful landscape and the main characters, that I was inescapably drawn into this chilling and terrifying story with the horrors of being buried alive clearly described. She has produced a remarkably powerful book, full of tension and fear, but also focusing on the culture and attitudes of society at the end of the 1960s. I thought the pace of the book dragged a bit in the middle section only to be ramped up to the utmost as it drew to it conclusion, which I have to say I hadn’t expected and am not sure I can believe. It is a compelling and absorbing book that  left me thinking about it days after I finished reading.

Many thanks to Orion Publishing Group for a review copy via NetGalley.

5 thoughts on “The Craftsman by Sharon Bolton”