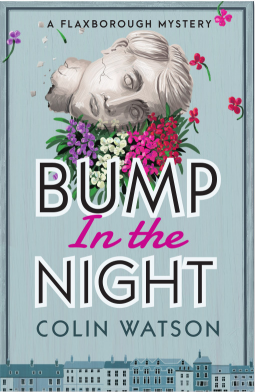 Tuesday nights have suddenly turned quite ridiculously noisy in the country town of Chalmsbury, where the good folk are outraged at having their rest disturbed.

It begins with a drinking fountain being blown to smithereens – next the statue of a local worthy loses his head, and the following week a giant glass eye is exploded. Despite the soft-soled sleuthing of cub reporter Len Leaper, the crime spate grows alarming.

Sheer vandalism is bad enough, but when a life is lost the amiable Inspector Purbright, called in from nearby Flaxborough to assist in enquiries, finds he must delve deep into the seamier side of this quiet town’s goings on.

Bump in the Night is the second book in the Flaxborough Mystery series, originally published in 1960. It’s entertaining, if rather absurd, with characters with silly surnames, which made me wonder if I was reading a spoof rather than a crime fiction novel. But no, this is crime fiction full of wordplay, innuendo and murder.

It’s set in the neighbouring town of Chalmesbury where a series of explosions have rocked the inhabitants. First a drinking fountain is blown up, then the statue of Alderman Berry is decapitated in another explosion, followed by the destruction of the sign outside the optician’s  premises, then culminating in the death of the local haulage contractor. Eventually Inspector Purbright is brought in from Flaxborough to investigate the murder.

On the surface this is an understated story but Watson’s turn of phrase and descriptions of the characters lifts it above the ordinary as the intricate relationships and secrets are revealed. The practical joker (and haulage contractor), Stan Biggadyke (what a name!) is a ‘big, loosed-leg man‘ with ‘hands clasped behind him … like a pair of courting Flamborough crabs‘ and the ‘back of his neck had the colour and texture of peeled salami.’

The other characters are equally finely drawn, just falling short of caricature – a local councillor, Councillor Pointer; the local police Chief Inspector Larch (who tells Purbright the town is ‘chock-a-block with lunatics‘ who will ‘chatter and natter as long as you’ve a mind to listen‘) and Sergeant Worple; Josiah Kebble, the newspaper editor, Leonard Leaper, a young keen reporter with ambitions to work for the Sun newspaper; Cornelius Payne, a jeweller; a cinema commissionaire, Mr Grope with a large face like a feather bolster who writes doggerel verse and ‘edifying slogans‘, such as ‘No Knife Cuts Like a Sharp Word‘ and ‘Remember Someone May Want to Use this After You’; and Mrs Crispin, a landlady, who is described as ‘mildly Guinness-glad‘, with a ‘gasometer-sized bosom‘ and the face of a ‘rubber doll, enormously inflated‘.

Inspector Purbright, he of the ‘high forehead crowned with short but unruly hair of preposterous king-cup yellow‘, is new to the town and has to feel his way through the details of the explosions and the puzzle of the memorial notice in the newspaper written in verse, cobbled together from two different poems.

Once I’d got into the swing of Watson’s style I raced through this delightful novel, trying to see beyond the red herrings and follow the twists and turns, but it was only very near the end that I managed to identify the culprit.

Colin Watson was educated at the Whitgift School in South Croydon, London. During his career as a journalist he worked in London and Newcastle-on-Tyne, where he was a leader-writer for Kemsley Newspapers.

His book Hopjoy Was Here (1962) received the Silver Dagger Award. He was married, with three children, and lived in Lincolnshire. After retiring from journalism he designed silver jewellery.

As well as a series of humorous detective novels set in the imaginary town of Flaxborough, featuring Inspector Purbright, Watson also wrote and later revised a study of detective stories and thrillers called Snobbery with Violence.

My thanks to Farrago for a review copy via NetGalley.

5 thoughts on “Bump in the Night by Colin Watson”