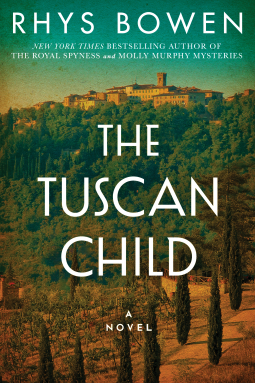 In 1944, British bomber pilot Hugo Langley parachuted from his stricken plane into the verdant fields of German-occupied Tuscany. Badly wounded, he found refuge in a ruined monastery and in the arms of Sofia Bartoli. But the love that kindled between them was shaken by an irreversible betrayal.

Nearly thirty years later, Hugo’s estranged daughter, Joanna, has returned home to the English countryside to arrange her father’s funeral. Among his personal effects is an unopened letter addressed to Sofia. In it is a startling revelation.

Still dealing with the emotional wounds of her own personal trauma, Joanna embarks on a healing journey to Tuscany to understand her father’s history—and maybe come to understand herself as well. Joanna soon discovers that some would prefer the past be left undisturbed, but she has come too far to let go of her father’s secrets now…

I enjoyed The Tuscan Child up to a point. I liked the historical setting of 1944 and the descriptions of Tuscany and Italian food are beautiful. It’s easy reading and the dialogue gives a good impression of people speaking in a foreign language in which they are not fluent. Although I love Italian food I did begin to groan when yet another meal was being prepared and described in detail.

But the split narrative between Hugo and Joanna didn’t work too well for me. I liked Hugo’s story more than Joanna’s and I wanted to know what happened to him which kept me reading. But I thought the book was more of a romance than a historical mystery. And I thought the mystery element wasn’t too difficult to work out with rather too many convenient events that revealed what had happened to Hugo.

My thanks to Lake Union for a review copy via NetGalley.

3 thoughts on “The Tuscan Child by Rhys Bowen”