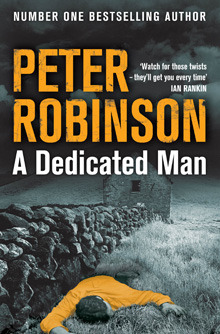 When the sun rose high enough to clear the slate roofs on the other side of the street, it crept through a chink in Sally Lumb’s curtain and lit on a strand of gold blonde hair that curled over her cheek. She was dreaming.

This opening doesn’t tell me much about the book. If I didn’t know it’s an Inspector Banks book I’d probably not bother reading much further. But reading the blurb encourages me to read on:

Near the village of Helmthorpe, Swainsdale, the body of a well-liked local historian is found half-buried under a dry stone wall. Harry Steadman has been brutally murdered. But who would want to kill such a thoughtful, dedicated man?

Chief Inspector Alan Banks is called in to investigate and soon discovers that disturbing secrets lie behind the apparently bucolic facade. It is clear that young Sally Lumb, locked in her lover’s arms on the night of the murder, knows more than she is letting on. And her knowledge could lead to danger . . .

‘He was a fine man, good-tempered, even-natured. He had a sharp mind – and a tongue to match when it came to it – but he was a good man; he never hurt a soul, and I can’t think why anyone would want to kill him.’

‘Somebody obviously felt differently,’ Banks said. ‘I hear he inherited a lot of money.’

I’m pleased that page 56 provides information about the man in the title and provides an answer to the question of why anyone would want to kill such a good man. I haven’t read much more of the book so I’m still in the dark about the motive – was the man really killed for his money?

What do you think? Would you continue reading?