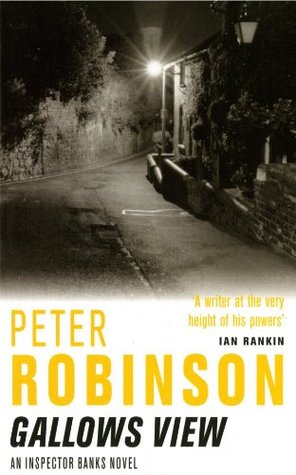 This year marks the 30th anniversary of the first Inspector Banks book, Gallows View by Peter Robinson* (see below). I’ve read some of the later Banks books, totally out of order, which doesn’t seem to matter as I think they work well as stand alone books.

Inspector Alan Banks has been in Eastvale in the Yorkshire Dales for six months, having relocated from London. He has now got used to the slower pace of life and is working well with his colleagues. Sandra, his wife, has also settled well in Eastvale, making friends with Harriet and joining the local photography club.

There’s a peeping tom in the area, targeting young, blonde women, following them as they leave the pub and then watching as they undress for bed and there is also spate of break-ins by two balaclava-wearing thugs who rob old ladies and vandalize their homes. It’s clear quite early in the book that the two thugs are teenagers, Trevor Sharp and his friend, Mick Webster, who progress from robbing old ladies to burgling more prosperous homes when their owners are away from home, guided by Mick’s older brother, Lenny.

The main mystery is that of Alice Matlock, an old woman, living on her own, who is is found dead in her ransacked house in Gallows View, a row of old terraced  cottages. Her body was discovered by her friend, Ethel Carstairs, lying on her back, having fractured her skull on the corner of a table while falling backwards – or had she been pushed? Was she also a victim of Trevor and Mick, could it have been the peeping tom, or was someone else responsible? It might have just been an accident – she was old and her bones were brittle.

Dr Jenny Fuller, a psychologist at York University, has been brought in to help by providing a profile for the peeping tom case. Banks, a happily married man, is immediately attracted to her. They work well together, although Sandra, his wife, is rather suspicious at first about their relationship when she discovers that Dr Fuller is a young, attractive redhead.

It’s a good start to the series, which has now reached 24 books. It has quite a relaxed pace, with a complex and well constructed plot. The characters are convincing and realistic, and I like Banks, a hard working dedicated detective who gets on well with his boss, Superintendent Gristhorpe, who likes to build dry stone walls in his spare time.

As well as the crimes Robinson also explores a number of other issues – for example, feminism and gender, and education, comparing comprehensives and grammar schools. One thing that really dates it is the frequent mention of smoking in pubs!

As with other detective novels that have since been adapted for TV there are differences from the books. Peter Robinson explains on his website he has no power in the TV universe, and he thinks of the Banks books and the TV series as parallel universes. The characters are clearly meant to be different versions of the same person; they look different, have different personalities and meet different fates in different worlds.

Gallows View is a book I’ve owned for over 2 years, so it qualifies for Bev’s Mount TBR Challenge.

*Peter Robinson later wrote a novella, Like A Virgin published in a short story collection, The Price of Love, which is about his last case in London just before he moved to Yorkshire.