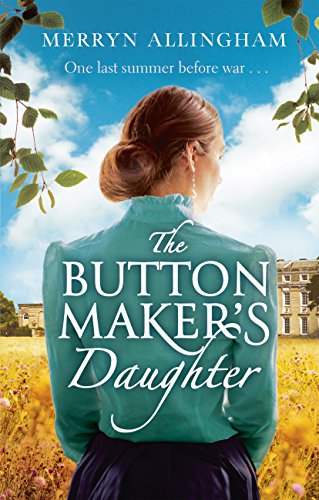 Historical fiction is one of my favourite genres, so I was pleased when I was offered a review copy of

As events in Europe and news of the impending threat of war trickle through, this is a novel that looks at the personal dramas that took place in a society already navigating huge social and political change. Born to an industry-owning father and an aristocratic mother, Elizabeth must juggle her own dreams of independence, her parents’ wishes for her ‘˜good marriage’, and the responsibility of reuniting her feuding family. Housemaid Ivy is desperate to marry before her love is pulled away to war, William is struggling with his own feelings towards his schoolboy friend, and Elizabeth is drawn to the promise a new life with a charming young architect. Everyone’s life hangs on the brink of change, and if war is declared, will there even be a future for the Summerhayes estate?

The Buttonmaker’s Daughter is set in Sussex in the summer of 1914 just before the start of the First World War, a summer of sweltering heat and of rising tension not only nationally and internationally but also personally for Elizabeth Summer and her family. The novel covers just a few months, but those few months contain so much tension and heartbreak as the feud in the Summers family comes to a climax over the question of who Elizabeth should marry and war on the continent becomes inevitable.

Alice, Elizabeth’s mother was brought up on the Amberley estate which her brother, Henry inherited. But she had made a ‘marriage of convenience’ with industrialist Joshua Summer which had brought the much needed money to save Amberley and at the same time had triggered Henry’s enmity. So when Elizabeth falls in love with Aiden Kellaway, an architect’s assistant working on the landscaping of the Summerhayes gardens both her parents and uncle appear united in finding her a ‘suitable’ husband, one with the proper connections.

The Buttonmaker’s Daughter is a beautiful book. I was completely immersed in the story as the relationship between the two families deteriorates and Elizabeth becomes increasingly aware of the danger both to herself and her younger brother William. The setting is idyllic, the characters are clearly drawn and the sense of life in the immediate pre-war period made me feel I was there in the midst of it all, experiencing the social conventions and class distinctions.

I hope Merryn Allingham will write a sequel as I would like to know more about what happened to them all during the war.

5 thoughts on “The Buttonmaker’s Daughter by Merryn Allingham”