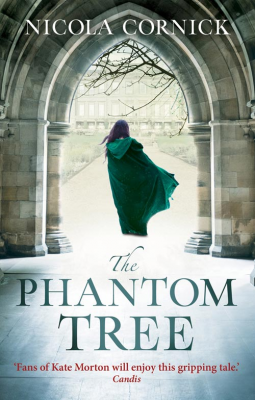 Last year I loved Nicola Cornick’s time-slip novel, House of Shadows. Her latest book is The Phantom Tree, due to be published on 29 December, another time-slip novel and I loved this one too.

‘My name is Mary Seymour and I am the daughter of one queen and the niece of another.’

Browsing antiques shops in Wiltshire, Alison Bannister stumbles across a delicate old portrait ‘“ supposedly of Anne Boleyn. Except Alison knows better’¦ The woman is Mary Seymour, the daughter of Katherine Parr who was taken to Wolf Hall in 1557 as an unwanted orphan and presumed dead after going missing as a child.

The painting is more than just a beautiful object from Alison’s past ‘“ it holds the key to her future, unlocking the mystery surrounding Mary’s disappearance, and the enigma of Alison’s son.

But Alison’s quest soon takes a dark and foreboding turn, as a meeting place called the Phantom Tree harbours secrets in its shadows’¦

The plot of The Phantom Tree alternates between the Tudor period and the present day following the life of Alison Banestre (known as Bannister in the present day) as she moves between the centuries trying to find out what happened to Mary Seymour. It is a mystery, based on the true story of Mary Seymour, the daughter of Katherine Parr (Henry VIII’s sixth wife) and Thomas Seymour, who she married after Henry’s death.

It’s a fascinating book, as little is known about Mary’s life. What is recorded is that she was born in 1548, her mother died after the birth and her father was executed a year later for treason against Edward VI. She disappeared from the records around about 1550, although there has been speculation that she lived until adulthood. In The Phantom Tree Nicola Cornick has provided another speculation on Mary’s life. As she states at the beginning of her book it is ‘entirely a work of fiction. The names, characters and incidents portrayed in it are the work of the author’s imagination.’

Having read Hilary Mantel’s, Wolf Hall, I was very interested in the setting of Wolf Hall where Mary and Alison, her cousin, went to live in 1557, the fourth year of the reign of Mary I. Mary Seymour was then ten years old and had a reputation for witchcraft. Wolf Hall, a rambling, run down manor house was owned by the Seymour family where Mary and other Seymour children went sent to live.

The time travel element of the book works well. I liked the way the traces of history in the present day are handled and are seen as layers of reality. Alison moves between the centuries, both forwards and backwards in time but then she found the gateway to the past had closed and she was trapped in the present day. She has to find another gateway where the past and the present meet, or some other means of connecting to the past.

I preferred the sixteenth century setting, with its belief in witchcraft slotting so well into the storyline. Mary has visions which are viewed with fear and superstition. Alison, in the future doesn’t know what happens to Mary, or to her son, Arthur, who was taken from her after his birth. She had helped Mary escape from Wolf Hall and in return Mary had promised to help her find Arthur. I think the characterisation is done well – Alison comes across as a rather unlikeable person, in contrast to Mary who is younger and has a gentler nature, although at first they didn’t get on together. I also liked the way the clues in the portrait helped Alison to discover what happened to Mary and Arthur.

My thanks to the publishers via NetGalley for a review copy of The Phantom Tree.  It is a book that seamlessly incorporates mystery and elements of the supernatural into the historical detail as the past and present meet. A most enjoyable book.

4 thoughts on “The Phantom Tree by Nicola Cornick”