Tommy and Tuppence Beresford first appeared in Agatha Christie’s The Secret Adversary (first published in 1922) when they had just met up after World War One, both in their twenties. Their next appearance is in Partners in Crime, a collection of short stories, first published in 1929.

Life has become a little dull, especially for Tuppence. Tommy works for the Secret Service but wants to see more action, so when Tommy’s boss Mr Carter offers them both a new assignment they jump at the opportunity. It’s to take over for six months the running of the International Detective Agency under the name of Mr Theodore Blunt. It had been a front for Bolshevist-spying activity and in particular they were to look out for blue letters with a Russian stamp on them. They were also free to undertake any other detective work that comes their way.

All of the stories first appeared in magazines between 1923 and 1928 and they are parodies of fictional detectives of the period, some of whom I recognised and some I didn’t. When she came to write her autobiography many years later, even Agatha Christie couldn’t recognise some of them, noting that whilst some had become household names, others had ‘more or less perished in oblivion. Those I recognised include Sherlock Holmes, Father Brown, The Old Man in the Corner, and Hercule Poirot, himself.

Most of the stories are self-contained adventures. They are slight and brief, and not really taxing or difficult to solve. I enjoyed reading them, because they are written with a light touch, and a sense of humour and fun. Tommy and Tuppence are likeable characters; Tommy is not as dizzy as David Walliams played him in the recent TV series. I’ve now read all the Tommy and Tuppence stories. There are four full length novels as well as Partners in Crime (Tommy and Tuppence 2) and unlike Poirot and Miss Marple Tommy and Tuppence age with each book:

My copy is the current edition with this cover: 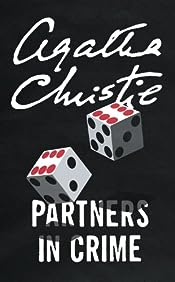 The first UK edition, however, has this cover, which I prefer.

So I’m choosing this cover for the Vintage Scavenger Hunt, in the category of a book showing a Shadowy Figure on its cover.

9 thoughts on “Partners in Crime by Agatha Christie”