This week’s book is The Glass Room by Simon Mawer, which I’ve just begun to read. It begins: 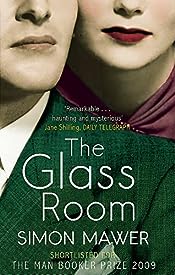 She knew after all these years. Something about the slope of the road, the way the trajectory of the car began to curve upwards, a perception of shape and motion that, despite being unused for thirty years, was still engraved on her mind, to be reawakened by the subtle coincidence of movement and inclination.

Her eyes were blue, so pale that they gave the curious illusion of transparency, as though you were looking through them and seeing the sky.

He fumbled for his lighter and watched as she bent towards the flame. She wore a grey cloche hat and her hair was dark and cut short, not cropped as severely as Liesel’s and her friends’, but short enough to be a statement that she was a modern woman. A Slav he fancied.

It looks from the opening sentences and the extract from page 56 that this is going to be a detailed, descriptive book. I like that.

High on a Czechoslovak hill, the Landauer House has been built for newlyweds Viktor and Liesel Landauer, a Jew married to a gentile. But, when the storm clouds of WW2 gather, the family must flee, accompanied by Viktor’s lover and her child. But the house’s story is far from over, as it passes from hand to hand, from Czech to Russian.

This is a work of fiction, but the house in Prague is real. Mawer follows it through all of the upheavals of 20th century Czech history.

16 thoughts on “My Friday Post: The Glass Room by Simon Mawer”