Once more I am behind with writing about the books I’ve read, so this is a short post with brief thoughts on The Cleaner of Chartres by Salley Vickers. I enjoyed it immensely. 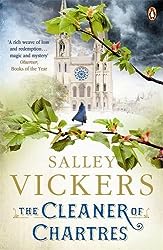 This is a beautiful book, beautifully written, with the character of Agnès Morel at its centre. Agnès was found as a baby in a straw shopping basket, wrapped in a white tablecloth, with just a single turquoise earring in the bottom of the basket that may or may not indicate her parentage. She was brought up by the Sisters of Our Lady of Mercy at Evreux. It tells of how Agnes became the cleaner of the Cathedral of Notre Dame in Chartres, in central France, north of Paris, and not only of the cathedral but also a cleaner for other residents of the town.

So, there is a mystery about her origins and also about her life before she arrived in Chartres. Moving between the past and the present, the details are slowly revealed. There are many characters, some likeable people including the Abbé Paul, Professor Jones, who teaches Agnes to read, Philippe Nevers, and Alain Fleury, who works on the cathedral restoration and some unlikeable characters such as Madame Beck and Sister (later Mother) Veronique whose interfering ways cause Agnes such a lot of trouble. All are convincing characters with depth.

I liked it all, the slow build up as Agnès’s history unfolds, the interaction of the characters and the description and history of the cathedral also added to my enjoyment of the book.

3 thoughts on “The Cleaner of Chartres by Salley Vickers”