When I began reading People of the Book by Geraldine Brooks I wondered why I’d left it nearly eight years on my book shelves before I  got round to reading it. I loved it; it’s a real gem! It has joined the ranks of my favourite books and is definitely a book for keeping and (I hope) for re-reading. 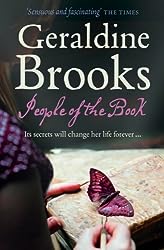 How could I not love a book about books, in particular an ancient book, one that was thought to be lost or destroyed, a book that escaped burning by the Inquisition and the Nazis, a book that survived shelling during the Bosnian War in the 1990s, a book known as the priceless Sarajevo Haggadah – a medieval Jewish prayer book containing the illustrated traditional text of the Passover Haggadah which accompanies the Feast of Passover.

In Geraldine Brooks’ Afterword she explains that People of the Book is fiction, inspired by the true story of the Hebrew codex known as the Sarajevo Haggadah. Some of the facts are true to the haggadah’s known history but most of the plot and all of the characters are imaginary. She then goes on to define what is true and what is fictional, which I think is the best way of presenting historical fiction.

Australian Hanna Heath is a rare-book restorer and it’s not only the content of the haggadah that interests her, it is the hidden history of the book that captured her imagination and also mine. She finds tiny clues to its history as she restores the book – a fragment of an insect’s wing, wine stains, salt crystals and a tiny white hair – clues to unlock its mysteries. The story of the book is told in reverse chronological order beginning in 1996 and working back to 1480. Interwoven with each story is Hanna’s own story as she too discovers her roots. It’s a story too of love and war, of family relationships, of Anti-Semitism and of historical religious conflicts as the haggadah survived disaster after disaster. It’s also a novel about preserving the past, its culture and history for future generations. It has depth and breadth and is beautifully written. I was irresistibly engrossed in this book and full of wonder at its stories, reaching back in time from Sarajevo to Vienna, Venice, Tarragona to Seville in 1480 and also Hanna’s story from 1996 to 2002.

There are many descriptions of the haggadah throughout the book, all of which made me eager to know more about it. This is just one example from the chapter on wine stains set in Venice in 1609:

Aryeh released the catches, admiring the work of the silversmith. Each clasp, closed, was in the form of a pair of wings. As the delicate catch released – still smoothly after more than a century – the wings opened to reveal a rosette enfolded within. Aryeh saw at once that the book was a haggadah, but unlike any he had seen before. The gold leaf, the pigments … he stared at the illuminations, opening each page eagerly. He was delighted, yet a little disturbed, to see Jewish stories told in an art so like that of the Christians’ prayer books. (page 163)

And here, by way of contrast, is a description of Arnhem Land in the north east corner of Australia’s Northern Territory, where Hanna is working in the caves studying the Aboriginal rock art to document and preserve it before the uranium or bauxite companies blasted it into rubble:

I stepped out of the cave and blinked in the bright daylight. The sun was a big disc of brilliant madder, reddening the stripes of ore that ran through the sheer black-and-ocher rock face. Down below, the first shoots of new spear grass washed the plain in vivid green. Light silvered the sheets of water left behind by the previous night’s downpour. We’d moved into Gunumeleng – one of six seasons the Aborigines identified in a year that whites simply divided into Wet and Dry. Gunumeleng brought the first storms. In another month, the entire plain would be flooded. The so-called road, which was actually virtually a marginal dirt track, would be impassable. (pages 339-340)

I just had to know more about the Sarajevo Haggadah and found these illustrations (see Wikimedia Commons for more illustrations and these sites for more information –  Wikipedia, The Times of Israel and About Haggadah: 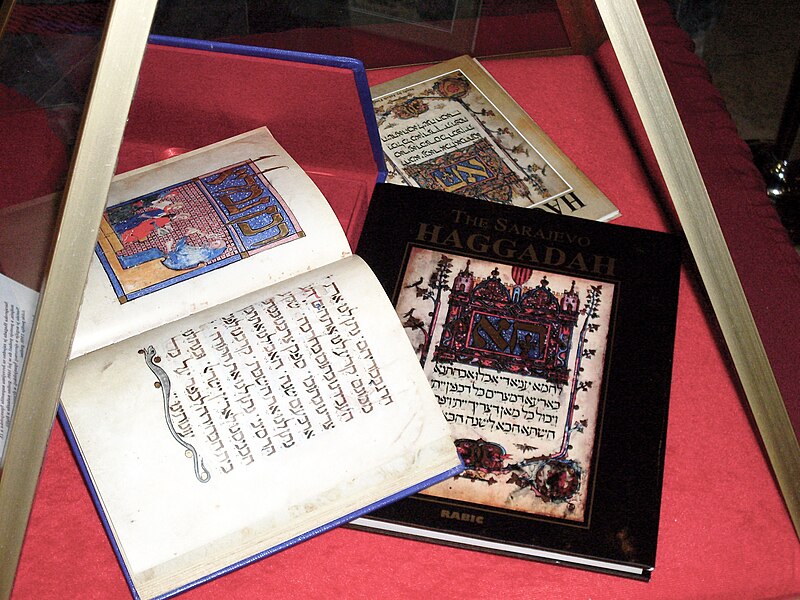 Copies of Sarajevo Haggadah in parliament building – from Wikimedia Commons

4 thoughts on “People of the Book by Geraldine Brooks”