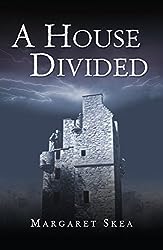 One of the best historical fiction books I read last year was Margaret Skea’s debut novel, Turn of the Tide, which captivated me completely transporting me  back in time to 16th century Scotland.  So I approached its sequel, A House Divided, hoping it would be just as good, and it is. Indeed it’s even better. Once more I was whisked back to the world of the feuding clans of Cunninghame and Montgomerie. It is the most gripping story of warring factions in Scotland, the French Wars of Religion, superstition and horrific witchcraft trials.

It’s now 1597, six years after the events in Turn of the Tide. The Munro family are believed to have died in a fire at their home, Broomelaw but Kate Munro and her three children are living at Braidstane in Ayrshire under the protection of the Montgomerie family. They have the assumed the name of ‘Grant’, in hiding from the Cunninghame family, particularly from William Cunninghame, the son of the Earl of Glencairn, head of the Cunninghame clan. Kate’s husband is in France, fighting with the Scots Gardes for the French Henri IV. Meanwhile William Cunninghame has taken possession of Broomelaw and is rebuilding the tower house. And it’s becoming more difficult and dangerous to keep their identity secret; the children are asking questions and the eldest, Robbie, wants to go to join his father in France.

Kate, who has gained a reputation as a ‘wise woman’ from her knowledge and skill in the use of herbs and plants for healing and as a midwife, is called to help Margaret Maxwell, the wife of Patrick, a Cunninghame supporter, with the birth of her baby. When Patrick meets Kate and her daughter, Maggie, he is suspicious. thinking they look familiar, reminding him of Munro’s wife, and so the danger begins. And it increases as Kate’s reputation grows and she is summoned to the Scottish court as Queen Anne (James VI’s wife), having heard of Kate’s expertise, needs her advice in carrying a baby to full-term.  She had been advised to try a number of methods to avoid a miscarriage:

I have eaten crushed orchid leaves, powdered fox’s lungs and crab’s eyes; drunk wolf oil and tincture of foxglove; been bled and leeched till I think I have little blood left; told to lie on my side and on my stomach, even upside down. Few treatments convenient and none effective. (location 3242)

It’s no wonder they failed and a wonder she survived!

There is so much I loved in this book – first of all the story itself, expertly narrated, full of tension and surprise, and then the characters, some based on real historical figures and others fictitious, such as the Munro family. The story is well grounded in research and based on facts – James VI, whilst waiting to inherit the English crown, wanted to bring peace to Scotland and to put an end to the wars between the clans. His interest in, or rather his obsession with witchcraft comes to the fore in this novel as Kate is accused as a witch and brought to trial as part of the Great Scottish Witch Hunt of 1597. Also historically accurate is the Scots involvement in France as under the terms of the ‘Auld Alliance’ they had citizenship rights in France as well as trading agreements and the Scots Gardes were an elite Scottish regiment whose duties included the provision of a personal bodyguard to the French King.

But it’s the personal touches that brought home to me what life was like in the 16th century, what their houses were like, the food they ate, the dangers that faced them in their daily lives, as well as the growing interest in science and medicine as opposed to superstition and religious bigotry and fervour.

This is an excellent book, one of the best I’ve read this year. Not only is the story absolutely fascinating, but it is also well written and well paced. The historical facts all blend seamlessly into the narrative, with beautiful descriptive passages not just of the landscape and the Scottish Court, but also of the grim details of warfare, of the horrors of the witch trials and of sickness, typhoid and plague, of wounds, of childbirth and of death. It’s strong, compelling reading, a book that made me keen to find out what would happen next and at the same time one I didn’t want to end.

Margaret Skea is currently working on her third novel – I’m looking forward to reading it!

7 thoughts on “A House Divided by Margaret Skea”