I always intend to write about the books I read soon after I’ve finished them, whilst the details and my reaction are fresh in my mind.  But recently I haven’t managed to do so and now have four books to review. I can deal with one of them quickly because I don’t have much to say about it – Styx and Stones by Carola Dunn. This is the seventh book in the Daisy Dalrymple Mystery series (there are 22 in total so far). I’ve read the first three and have been waiting to find the fourth to read them in order, but gave in when I saw this secondhand copy. 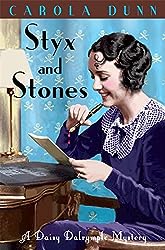 Set in the 1920s this is a cosy mystery that doesn’t tax the brain too much. Daisy’s brother-in-law, Lord John Frobisher, asks her to investigate a series of poison pen letters that many of the local villagers including himself have been receiving. So Daisy and her step-daughter, Belinda, go to stay with her sister and brother-in-law. Lord John is anxious to avoid a scandal, but when a murder is committed the local police have to be informed about the letters. Daisy’s fiancÃ©, Detective Chief Inspector Alec Fletcher of Scotland Yard is concerned about Daisy and Belinda, so he gets involved informally, all the time trying to keep Daisy out of danger. The village is a hotbed of gossip, intrigue and resentment, with plenty of people with possible cause to commit murder. I liked the interaction of the members of the WI, bossed by the vicar’s wife and the way Daisy managed to get each of them to talk to her.

Styx and Stones is a quick and easy read, (although I didn’t guess the identity of the murderer until quite near the end) with the focus on Daisy and Alec’s relationship as well as on the poison pen and murder mysteries.

5 thoughts on “Styx and Stones by Carola Dunn”