In 1944 Agatha Christie published Death Comes as the End and in 1945 Sparkling Cyanide, neither of them featuring Hercule Poirot or Miss Jane Marple. By chance these two books are the last full length crime fiction novels by Agatha Christie that I had left to read. There are plenty of short stories of hers that I still have to read and her Mary Westmacott novels as well as her plays, so it is not the end of my reading of her work. 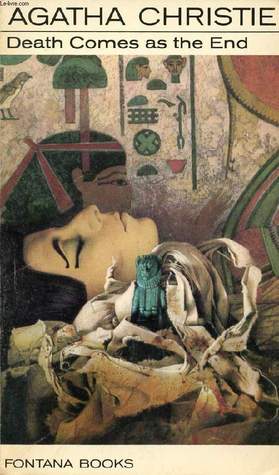 The idea to write a detective story set in Ancient Egypt came from a friend, Professor Stephen Glanville – Death Comes as the End was the result. It is set on the West bank of the Nile at Thebes in about 2000 BC. But in her Authors Note Agatha Christie explained that both time and place are incidental and any other time or place would have served as well. She based her characters and plot on some letters from a Ka priest in the 11th Dynasty:

The letters painted to perfection the picture of a living family: the father fussy, opinionated, annoyed with his sons who did not do as he said; the sons, one obedient but not obviously bright, and the other sharp-tempered, showy, and extravagant. The letters the father wrote to his two sons were about how he must take care of a certain middle-aged woman, obviously one of those poor relations who all through the ages live with families, to whom the heads of families are always kindly, whereas the children usually grow up disliking them because they are often sycophants and makers of mischief. (Agatha Christie’s Autobiography page 514)

From these letters she constructed her story, adding Renisenb, a daughter, Nofret, a concubine for Imhotep, the father, a spoilt younger son and a greedy but shrewd grandmother. He is besotted by Nofret who antagonises the family, setting Imhotep against them. Things come to a head after Nofret has manipulated Imhotep to disinherit his sons and marry her and she is found dead, apparently having fallen from a cliff. More deaths follow.

The mystery in this book is actually not too puzzling. For me, its interest lay in the setting and period details. Agatha Christie, according to her Autobiography had done a lot of reading from books lent to her by Glanville and had also bombarded him with questions about daily life and customs in the 11th Dynasty – such as what food did they eat, how did they cook it, did men and women eat together, what sort of rooms did they sleep in, where did they keep their linen, what sort of houses did they have, and so on?

The end result for me was of authenticity – it all came over as real, the characters were individuals, their relationships were convincing and although Agatha Christie wasn’t happy with the ending, which she changed on Glanville’s suggestion, I thought it was fine. And just as she had pleasure in writing it I had pleasure in reading it.

8 thoughts on “Death Comes as the End by Agatha Christie”