With not many days left until Christmas and the New Year I’ve just about got time to write a bit about two books I’ve read this month from my to-be-read books. I’ll be writing about the second book in a later post.

The first one is Imperium by Robert Harris, the first in his Cicero Trilogy. 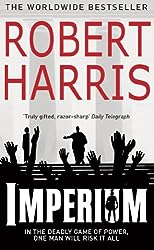 I love historical fiction and over the years I’ve read quite a lot of it, including novels set in Ancient Rome, so I’m familiar with the characters in this book, but not about all the details that Robert Harris has packed into Imperium.

Beginning in 79 BC, this book set in the Republican era is a fictional biography of Marcus Tullius Cicero by Tiro, his slave secretary. Tiro was a real person who did write a biography of Cicero, which has since been lost in the collapse of the Roman Empire. Tiro is credited with the invention of shorthand. Harris has based Imperium on, among other sources, Cicero’s letters, which Tiro had recorded, successfully interweaving Cicero’s own words with his own imagination.  It is basically a political history, a story filled with intrigue, scheming and treachery in the search for political power as Cicero, a senator, works his way to power as one of Rome’s two consuls.

The first part of the book (and I think the best part) covers the trial of Verres, a corrupt governor of Sicily. I found this gripping as it was by no means obvious that Verres would be found guilty. Cicero builds the case against him and the resulting trial is a dramatic showdown.

After that the book dragged just a little bit for me as it moved on to describing a complicated struggle to change Rome’s government from a Republic to having an Emperor as absolute ruler. But it picked up again towards the end and overall I thought this was a very good book and I’m keen to read the second in the trilogy, Lustrum.

In such a short post as this is I cannot go into much detail – and the novel is very detailed. I marked many passages that struck me as interesting and felt much of the struggle for power applies as much today as it did in Ancient Rome. I’ll finish this post with one quotation (there are plenty of others I could have chosen):

You can always spot a fool, for he is the man who will tell you he knows who is going to win an election. But an election is a living thing – you might almost say, the most vigorously alive thing there is – with thousands upon thousands of brains and limbs and eyes and thoughts and desires, and it will wriggle and turn and run off in directions no one ever predicted, sometimes just for the joy of proving the wiseacres wrong. (page 471)

5 thoughts on “Imperium by Robert Harris”