Nagasaki: Life after Nuclear War by Susan Southard is an amazing, heart-wrenching book. 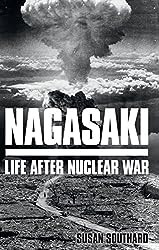 The facts are horrendous – on August 9th 1945, two days after the atomic bombing of Hiroshima, a five-ton plutonium bomb was dropped on the small coastal town of Nagasaki. The effects were cataclysmic.

This must be one of the most devastatingly sad and depressing books I’ve read and yet also one of the most uplifting, detailing the dropping of the bomb, which killed 74,000 people and injured another 75,000. As the subtitle indicates this book is not just about the events of 9 August 1945 but it follows the lives of five of the survivors from then to the present day. And it is their accounts which make this such an emotive and uplifting book, as it shows their bravery, how they survived, and how they were eventually able to tell others about their experiences. Along with all the facts about the after effects of the bombing, the destruction, and radiation, it exposes the true horror of atomic warfare, making it an impressive and most compelling account of pain, fear, bravery and compassion.

Throughout the book the black and white photos illustrate the true horror of the effects of the bomb – photos of Nagasaki both before and after the bomb was dropped, of five survivors – Wada Kohi (aged 18 in August 1945), a street car operator; Nagano Etsuko (aged 16), who worked on a production line in a Mitsubishi airplane parts factory;  Taniguchi Sumiteru (aged 16), who worked at Minchino-o Post Office; Yoshida Katsuji (aged 13), a student at Nagasaki Prefecture Technical School on a ship building course; and Do-oh Mineko (aged 15), formerly a student at Keiho Girls High School, working at the Mitsubishi Arms Factory Onashi Plant. There are also maps showing Japan today and of Nagasaki 1945 showing the Scope of Atomic Bomb Damage.

Susan Southard’s ten years of research has resulted in this impressive book as she reveals what happened in particular to these five survivors, their immediate injuries, the radiation-related cancers and illnesses they have suffered, and their difficulties of daily living still in pain both physical and emotional.

In addition to all that Nagasaki ‘reveals the censorship that kept the suffering endured by the hibakusha [atomic bomb-affected people] hidden around the world. For years after the bombings news reports and scientific research were censored by U.S. occupation forces and the U.S. government led an efficient campaign to justify the necessity and morality of dropping the bombs’ (from the jacket sleeve).

I knew a bit about Hiroshima and Nagasaki before I read this book but it has opened my eyes to the true horror of nuclear war and the need to prevent anything like this happening again.

Many thanks to Souvenir Press Ltd for sending me a complimentary copy for review.

5 thoughts on “Nagasaki: Life After Nuclear War by Susan Southard”