Lolly Willowes has been on my radar for a few years now and I’ve seen a few other bloggers have been reading it recently – Cath for one at Read Warbler. 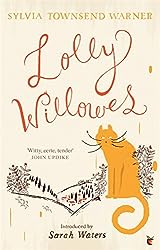 After the death of her adored father, Laura ‘Lolly’ Willowes settles into her role of the ‘indispensable’ maiden aunt of the family, wholly dependent, an unpaid nanny and housekeeper. Two decades pass; the children are grown, and Lolly unexpectedly moves to a village, alone. Here, happy and unfettered, she revels in a new existence, nagged only by the sense of a secret she has yet to discover.

And here is what I thought about it.

Published in 1926, Lolly Willowes is Sylvia Townsend Warner’s first novel. In the Introduction to this edition by Sarah Waters she states that it was an instant hit  with readers and critics and I can see why. On the surface it’s a gentle fantasy, but it’s not at all whimsical, and Sylvia Townsend Warner’s writing is beautiful, lovely lyrical descriptions of both town and country. It’s a book of two parts – the first about Lolly’s existence with her brother’s family in London, where she becomes increasingly disquiet and finds her self indulging in day dreaming about being

‘in the country, at dusk, and alone, and strangely at peace. … Her mind was groping after something that eluded her experience, a something that was shadowy and menacing, yet in some way congenial, a something that lurked in waste places, that was hinted at by the sound of water gurgling through deep channels and by the voices of birds of ill-omen. (page 67)

There’s a bit of a spoiler in this next paragraph.

The second part about her life in the little village of Great Mop, in the Chilterns in the Buckinghamshire countryside is in direct contrast, as she gradually regains the peaceful happy existence she had had growing up. But Great Mop is not just a sleepy backwater because as Laura discovers there are unusual forces at large and she finds herself with her neighbours at a night-time gathering dancing in a continual flux. Her life is changed forever as she meets Satan, who turns out to have a happy relationship with his servants and she enters into a new independence.

So this is a somewhat magical, mystical book and underlying the text is the changing position of women in society in the 1920s,  especially single women financially dependent on their male relatives, who previously were expected to remain within the family looking after elderly relatives, or as in Lolly’s case helping with looking after the children and the running of the household.  In moving away from her family Lolly asserts her independence and enjoys her single life as part of the village community.

So, it’s a book I really enjoyed, for its content, the characters and setting and last but not least Sylvia Townsend Warner’s style of writing. She went on to write more books and poetry, including these novels: