From out of the black hole that is my Kindle came Silver Lies by Ann Parker, a new-to-me author. Books have been known to disappear for ever in there and this one had been languishing down in the depths for three years, so I thought it was time to read it. It looked as though it would be a bit different from other books I’ve been reading this year. Apart from True Grit I don’t think I’ve read any westerns for years and actually this one is not a typical western. It’s not a Cowboys and Indians type western at all but is set in 1879/80 in the silver-mining town of Leadville, Colarado in the heart of the Rocky Mountains. It probably fits in more with the crime fiction genre than with westerns, but it was the setting  that attracted me to it. 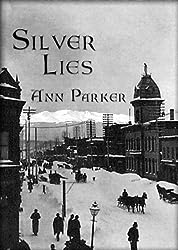 It’s a really good story beginning when Joe Rose, a silver assayer, facing a bleak future as the last of his money has gone and the hope of making his fortune in silver has disappeared, is found dead in Tiger Alley propped up behind the Silver Queen saloon. Inez Stannert’s husband Mark had won the saloon in a poker game and eight months before the story begins he had left her and their friend and business partner, Abe Jackson to run it on their own. Inez has no idea where he is and whether he’ll ever return.

Joe’s death is just the start of the mystery – was his death an accident or was he murdered and if so why?  Inez sets out to discover the truth and although his wife Emma has asked her to settle his affairs for her what is she keeping from Inez? Where is Mark and why did he leave? There is a new Reverend in town. Inez falls for his charms but is he to be trusted? She had him pegged as a gambler rather than a man of the cloth. And she doesn’t trust the new marshall either – ‘a thin man with the look of a hungry rattlesnake’. Inez knows he is ‘just a two-bit gunslinger from Texas’ hired by the ‘silver barons to keep the peace after last month’s lynching’. So it’s no wonder that she uncovers a web of deceit, counterfeit, blackmail and murder.

With plenty of memorable characters I could easily imagine I was in the silver rush town, a town where:

People rush in – from the East, from the West – and collide at the top of the Rockies. They’re looking for riches or looking to escape. And running. Everyone’s either from their past or running toward some elusive vision of the future. (location 5896)

Leadville was a colourful place, a boom-town, bustling with life -everything is there – the Silver Queen saloon and the Crystal Belle Saloon, Leadville’s leading parlor house, a brick built opera house, whose patrons ‘swelled the after-midnight crowds’ in the Silver Queen saloon, five banks and a small white church with a steeple.

Silver Lies won the Willa Award for Historical Fiction and the Colorado Gold Award and was chosen as best mystery of the year by Publishers Weekly and The Chicago Tribune.  For more information about Ann Parker and her books see her website.

I was completely engrossed in this book with its multi-layered and intricate plot that kept me guessing all the way through.  I hope to read more of this series: