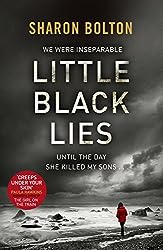 You can tell from the title what to expect from this book – lies, black lies, but they’re not little lies, they are whopping great big lies. The story is narrated by three of the main characters, Catrin, Callum and Rachel, all unreliable narrators either self deceptive, delusional or manipulative. They are all damaged characters.

Three years before the story begins Catrin’s two sons died in an accident caused by her then best friend Rachel. She has never got over it; they have haunted her ever since and she has not spoken to Rachel since then, determined to take revenge as the third anniversary of their death approaches. A year after their deaths Fred Harper went missing and was never found, then another boy, Jimmy Brown disappeared. As the story begins yet another boy, Archie West is missing. The nightmare continues with the disappearance of Peter, Rachel’s third and youngest son.

Little Black Lies is set in the Falkland Islands in 1994, twelve years after the war and Sharon Bolton’s descriptions of the islands paint a vivid picture of the isolation, the close knit community and war scarred landscape.

But there are a few things about this book that mean whilst I enjoyed the descriptive writing, the sense of place and the opening section very much I didn’t really like it. I began reading it with high expectations as it has received much praise and I’ve enjoyed everything else by Sharon Bolton that I’ve read. And although I was dismayed when I found it was written in the present tense (which is not my favourite style) I thought it was very promising and read on eagerly.

But when I finished it I gave it 3 stars on Goodreads, rounded up from 2.5 (Goodreads doesn’t have half marks!). I wasn’t keen on the focus on missing/dead children which so many books seem to have had recently. And it was a combination of the present tense and the way the plot descended into more of a farce with several twists and turns, particularly as the book draws to an end, one after the other that I just didn’t think was credible. The final  twist at the end came out of the blue for me, although thinking back it shouldn’t have been such a surprise. But I felt a bit cheated. In fact I’m rather annoyed with myself as I’d totally forgotten FictionFan had reviewed this book and I’d thought then that it was one that didn’t appeal to me – at least I was right!