I started reading The Ghosts of Altona by Craig Russell yesterday. 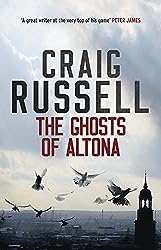 Winter had been half-hearted that day.

‘So why, exactly, are we talking to this guy more than any other neighbours?’ asked Anna Wolff as she and Fabel got out of the unmarked police BMW. ‘Schalthoff has no record … never been so much as a suspect for anything and has no dodgy connections that we can find. I just don’t get why you get a vibe from him. What is it – some kind of hunch?

This book won the 2015 Bloody Scotland Crime Novel of the Year. It’s the first book by Craig Russell’s that I’ve noticed. How could I have missed the others? This is his seventh Jan Fabel book!

Jan Fabel is a changed man. Head of the Polizei Hamburg’s Murder Commission, Fabel has dealt with the dead for nearly two decades, but when a routine enquiry becomes a life-threatening – and life-altering – experience, he finds himself on much closer terms with death than ever before.

Fabel’s first case at the Murder Commission comes back to haunt him: Monika Krone’s body is found at last, fifteen years after she went missing. Monika – ethereally beautiful, intelligent, cruel – was the centre of a group of students obsessed with the gothic. Fabel re-opens the case. What happened that night, when Monika left a party and disappeared into thin air?

Meanwhile, Hamburg’s most dangerous serial rapist has escaped from high-security prison. Fabel is convinced he had outside help, but from whom? His suspicions that the escape is connected to the discovery of Monika’s body seem to lead to nothing when there are no sightings of the fugitive, but little can he imagine the real purpose for which this monster has been unleashed.

When men involved with Monika start turning up dead, the crime scenes full of gothic symbolism, Fabel realizes he is looking for a killer with both a hunger for vengeance and a terrifying taste for the macabre. A true gothic demon is stalking the streets of Hamburg…

I’m enjoying what I’ve read so far. What do you think – have you read any of Craig Russell’s books? Would you read on?

8 thoughts on “First Chapter, First Paragraph: The Ghosts of Altona”