This week’s book is The Outcast Dead by Elly Griffiths, which I’m planning to read soon. It begins: 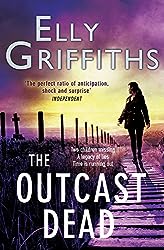 ‘And we ask your abundant blessing, Lord, on these, the outcast dead.

There is a murmured response from the group gathered on the bank below the castle walls. But Ruth Galloway, standing at the back, says nothing. She is wearing the expression of polite neutrality she assumes whenever God is mentioned. This mask has stood her in good stead over the years and she sees no reason to drop it now. But she approves of the Prayers for the Outcast Dead. This brief ecumenical service is held every year for the unknown dead of Norwich: the bodies thrown into unmarked graves, the paupers, the plague victims, forgotten, unmourned, except this motley collection of archaeologists, historians and sundry hangers-on.

Ruth drinks her cold cappuccino and wonders how Cathbad always manages to make her feel so guilty. It’s not her fault that his friend’s been arrested.

Forensic archaeologist Ruth Galloway has excavated a body from the grounds of Norwich Castle, once a prison. The body may be that of Victorian murderess Jemima Green. Called Mother Hook for her claw-like hand, Jemima was hanged for the murder of five children.

DCI Harry Nelson has no time for long-ago killers. Investigating the case of three infants found dead, one after the other, in their King’s Lynn home, he’s convinced that their mother is responsible.

Then a child goes missing. Could the abduction be linked to the long-dead Mother Hook? Ruth is pulled into the case, and back towards Nelson.

I always enjoy the Ruth Galloway books, despite the fact that they are written in the present tense, so I’m hoping this one is just as good as the earlier books. This is the sixth in the series. (I’m behind with this series ‘“ the seventh book was published earlier this year.) They are a mix of modern day murder mysteries and archaeology, with an added element of the supernatural.