William Brodrick’s books are meaty, books that make me think. Nothing is straight forward, they’re layered books, delving into the past, uncovering secrets and revealing crimes. They are well researched, bringing the past to life. 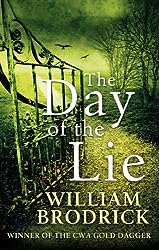 In The Day of the Lie (the 4th Father Anselm book) the past in question is post Second World War Poland, covering  the early 1950s, the early 1980s and the present day.

Blurb from the back cover of my paperback copy:

In present day Cambridge, Father Anselm receives a visit from an old friend with a dangerous story to tell – the story of a woman in Eastern Europe in the icy grip of the Cold War. She was brave, brilliant … and betrayed by someone close to her – someone still unknown. What became of this woman and the dark secret she kept?

No one can be trusted. Nothing is as it seems. Before more blood is spilt, Anselm must peel back years of history, decades of secrets and a half-century of lies in order to expose a secret so shocking that some would rather die than see it revealed.

Father Anselm’s old friend John has asked him to investigate who had betrayed  Roza Mojeska. She had been part of an underground resistance movement, had been arrested and tortured by the secret police, in particular by Otto Brack, in order to uncover the identity of the Shoemaker, the author of a dissident newspaper, Freedom and Independence.

Never explicitly graphic, Brodrick conveys the horror of the torture chamber and as Anselm’s Prior warns him he had to enter ‘the world of Otto Brack, this frightening man who learned how to bring about evil by exploiting someone who is good, laying – in part – the evil at their door.‘ (page 75-6) It’s a world where ‘twisted people lead twisted lives and the roads they build around them are never straight and true.’

My knowledge of the period is limited, so I found the historical setting quite difficult to follow, as the narrative switches between the time periods, but once I had sorted out the relationships between the characters (or I thought I had) it became clearer. But there is also the problem of working out who is ‘good’ and who is ‘bad’, just who is telling the truth, whose recollection of the past is ‘correct’? I thought I knew, but then there was a shift and I wasn’t sure right up to the end of the book.

Looking back on the book now (I finished reading it over a week ago) I can say I did enjoy it, but it was hard work in parts.

The Father Anselm books (with links to my posts) are:

And the latest book has just been published:

The Silent Ones by William Brodrick published 2 July 2015.

The Day of the Lie fits into the Mount TBR Challenge and is also a book I identified as one for the 10 Books of Summer Challenge.

3 thoughts on “The Day of the Lie by William Brodrick”