I’m pleased that I’ve read 8 books in May as my reading and blogging was interrupted by gardening. The grass is now growing at a rate of knots and the weeds, especially the ground elder, are rampant, threatening to take over the borders. So I’ve spent a lot of time this month mowing, weeding and strimming.

But I’ve also read these books and written about all of them, except H is for Hawk – post to follow some time soon (I hope). Three of the books are non fiction, one is a book from Lovereading for review and six are library books – no TBR books (books acquired before 1 January 2015) this month! I must get back to reading from those books I’ve had for years very soon!

These are the books I read:

Gray Mountain by John Grisham (Library book) – this book is just as much a campaign against injustice and the misuse of power, about the good little guys against the big bad guys as his earlier books are. In this case it’s the big coal companies that come under the microscope, companies that are  ruining the environment by strip-mining in the Appalachian mountains. I liked the view of the small town community, the mountain scenery, the legal cases large and small and the tension created by the danger of opposing the big coal companies.

The Lost Garden by Katharine Swartz (Review book) – an emotionally intense novel of love, loss and grief, set in both the past and the present day, in a small village on the Cumbrian coast, a gentle story, well told and an enjoyable read. In 1919 Eleanor, the daughter of the vicar of Goswell, is struggling to adjust to the loss of her brother, Walter who died just before the Armistice was declared and in the present day half-sisters Marin and Rebecca are coming to terms with the death of their father and his wife.

Gently North West by Alan Hunter (Library book) – set in the fictitious village of Strathtudlem in Scotland in 1967 where Gently is on holiday with his friend, Barbara Merryn and his sister, Bridget and her husband. Gently gets involved in the investigations into the murder of Donnie Dunglass,  found, stabbed in the back, face down on the heather. I thought it was an enjoyable book although I thought the murder mystery was rather far-fetched.

Nothing To Be Frightened Of by Julian Barnes (Library book, Non Fiction) – a collection of thoughts centred around Barnes’s fear of death and so inevitably he considers the question of religion and especially God. Interwoven with his thoughts about his agnosticism and death are anecdotes about his family and himself, thoughts on literature (particularly French literature) and it’s relationship to life. I found it all fascinating.

Dry Bones That Dream by Peter Robinson (Library book) – Banks investigates the murder of Keith Rothwell, an accountant, a  mild-mannered, dull sort of person it seems. But is that all there is to Rothwell? Banks unearths the secrets the characters have kept hidden from their family and friends. There’s also money-laundering and international and political shenanigans involved. Maybe not the best Banks book I’ve read.

H is for Hawk by Helen Macdonald (Kindle, Non Fiction) – no post yet. In some ways a difficult book to read – about training a goshawk and the author’s struggle with grief, mourning the death of her father.

Harbour Street by Ann Cleeves (Library book) This is the fifth Vera book and I loved it. It’s so good I read it twice because I watched the TV version after I finished reading the book – and it confused me as it’s different from the book! So I went back and re-read it. It is so much better than the TV adaptation, which I think suffered from being condensed into just one hour and a half length programme.

Poirot and Me by David Suchet (Library book, Non Fiction) – this consists largely of Suchet’s summaries of the stories and how he went about analysing Poirot’s character and how he played the part. This is a fascinating account of both the Poirot series and of David Suchet’s career.

I have no difficulty this month with naming my favourite book of the month. All the time I was reading it I was thoroughly absorbed and intrigued by Harbour Street by Ann Cleeves. 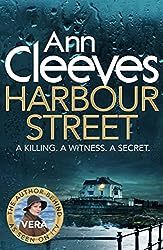