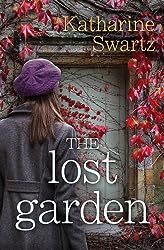 The Lost Garden is  an emotionally intense novel of love, loss and grief, set in both the past and the present day, in a small village on the Cumbrian coast.

In 1919 Eleanor, the daughter of the vicar of Goswell, is struggling to adjust to the loss of her brother, Walter who died just before the Armistice was declared and in the present day half-sisters Marin and Rebecca are coming to terms with the death of their father and his wife.

The link between the two stories centres around the walled garden at the back of the Bower House, a small house next to the church. It was said to have been the herb garden for the monastery before the Reformation.

In 1919 the garden is covered in brambles and Eleanor decides she wants to make it into a garden of remembrance, a place to just be, to remember or to forget as much as you need. And she begins to restore it with the help of the church gardener, Jack. As they do so the garden begins to blossom as winter moves into spring and summer, but the mood of both the family and the country remains sombre as they come to terms with the aftermath of the First World War.

In the present day, Marin has bought the Bower House, not knowing its history. Rebecca discovers the walled garden once more overgrown with brambles and weeds and it captures her imagination. And when Marin she sees a photo of a young woman in the garden, thought to have been taken around 1920 she is determined to find out more – just who was the young woman and what is underneath the brambles. With the help of the local gardener, Joss, she begins to restore the garden and in doing so they discover secrets about both the past and the present.

The Lost Garden is a gentle story, well told and an enjoyable read, switching between the past and the present. The differences in attitudes and social conventions of the times provide a distinct contrast and highlights the parallels between the two stories. I liked the story-lines for both Marin and Eleanor, both have difficult relationships with their sisters and both are coming to terms with their grief, but on the whole I was more interested in Eleanor’s story, set against the backdrop of the post First World War.

My thanks to Lovereading for providing an advance proof of this novel, due to be published 15 May 2015. The Lost Garden is the second book in Katharine Swartz’s Tales from Goswell series – the first is The Vicar’s Wife.

2 thoughts on “The Lost Garden by Katharine Swartz”