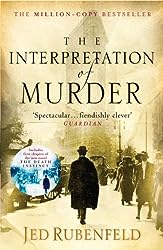 I was looking forward to reading The Interpretation of Murder by Jed Rubenfeld. It had sat on my shelves for nearly 8 years and I decided it was time to read it this year, including it in my TBR Pile Challenge list of books. It’s historical fiction – a mixture of murder mystery and psychoanalysis with an interpretation of ‘˜Hamlet‘˜ thrown in.

It began well as Sigmund Freud and Carl Jung arrived in New York in 1909 to give a series of lectures and to receive an honorary degree from Clark University. That much is fact, but this book is a work of fiction as Rubenfeld makes clear in his Author’s Note and most of the characters are fictional.

There are some things that I did think were well done, for example the descriptions of New York as the city grew, its architecture and streets, the building of the Manhattan Bridge; and as I mentioned earlier the interpretation of ‘Hamlet‘. But as I read on I began to lose interest and at times I felt it was slowed down too much by psychological exposition and debate. Rubenfeld is no doubt well grounded in Freud – as a Princeton undergraduate he wrote his senior thesis on Freud – and also in Shakespeare, which he studied at the Juilliard School of Drama. I found his ideas on interpreting ‘Hamlet‘ most interesting. But I was less enamoured with the dialogue between Freud and Jung, which as Rubenfeld explained is drawn from their own letters, essays and statements, which whilst being factually accurate, doesn’t come across as real conversation.

I thought the murder mystery was unconvincing and too convoluted. Briefly, the morning after Freud’s arrival a young woman is found brutally murdered and later a second, Nora Acton, is attacked in a similar fashion but she survives, although unable to speak. Freud is asked to help by psychoanalysing Nora and asks his young American colleague, Dr Stratham Younger to carry out the analysis. To cut a long story short Younger is helped in his investigations by Detective Jimmy Littlemore and together they discover what really happened.

Maybe I was expecting too much from this book, which is described in the blurb as’Spectacular … fiendishly clever‘, and a ‘thrilling heart-in-the-mouth read … Once you start reading, it’s impossible to put down.’  It jumps about a bit too much for my liking, between narrators and sub-plots, some of the characters came over a bit flat and I didn’t find it either ‘fiendishly clever‘ or ‘impossible to put down‘.

8 thoughts on “The Interpretation of Murder by Jed Rubenfeld”