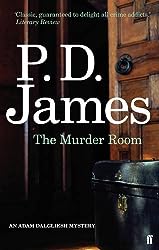 The Murder Room by P D James is one of the last of the Adam Dalgleish books, first published in 2003 . Although I’ve not read many of the books I’ve watched most (if not all) of the TV adaptations, but I don’t remember watching this one.

The Murder Room itself is in the Dupayne Museum, displaying the most notorious murder cases of the 1920s and 30s, with contemporary newspaper reports of the crimes and trials, photographs and actual exhibits from the scenes of the murders. These were actual crimes and not fictional cases made up by P D James.

The novel  begins, as Commander Adam Dalgleish visits the Dupayne in the company of his friend Conrad Ackroyd who is writing a series of articles on murder as a symbol of its age. A week later the first body is discovered at the Museum and Adam and his colleagues in Scotland Yard’s Special Investigation Squad are called in to investigate the killing, which appears to be a copycat murder of one of the 1930s’ crimes.

The Murder Room is not a quick read. It begins slowly with a detailed description of the main characters and it is only after 150 or so pages that the first murder occurs, so by that time I had a good idea of who might be killed but not of the culprit as many of the characters could all have had the motive and opportunity. There are two more killings before Dalgleish reveals the culprit.

More used to fast paced murder mysteries initially I was impatient with this slow start but soon settled into P D James’ approach and appreciated the depth of the intricate plot. The setting is fascinating and the characters are convincing, so much so that I was hoping the second victim wouldn’t be one of my favourite characters.

The lease on the Museum is up for renewal and not everyone wants it to continue – as one of the characters says:

It’s the past … it’s about dead people and dead years … we’re too obsessed with our past, with hoarding and collecting for the sake of it.

There is the Dupayne family – Marcus and Caroline both actively involved in running the Museum, and their brother Nigel, who is a psychiatrist, and his daughter Sarah; the Museum staff – Muriel Godby in charge of the Museum’s day to day running, Tally Clutton the housekeeper, James Calder-Hale, the curator who used to work for MI5; Marie Strickland, a volunteer calligraphist; and Ryan Archer, the handyman and gardener.

3 thoughts on “The Murder Room by P D James”