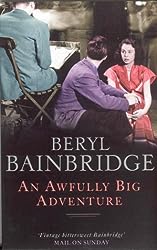 It’s trite to say that Beryl Bainbridge’s An Awfully Big Adventure is ‘awfully good’ – but it is!

First published in 1989 and shortlisted for the Booker Prize, this is set in 1950, as a Liverpool repertory theatre company are rehearsing its Christmas production of Peter Pan. The story centres around Stella, a teenager and an aspiring actress who has been taken on as the assistant stage manager.

It’s semi-autobiographical based on Beryl Bainbridge’s own experience as an assistant stage manager in a Liverpool theatre. On the face of it this is a straight forward story of the theatre company but underneath it’s packed with emotion, pathos and drama. And it’s firmly grounded in a grim post-war 1950s England, food rationing still in operation and bombed buildings still in ruins overgrown with weeds.

Stella lives with her Uncle Vernon and Aunt Lily, who run a boarding house. To a large extent Stella escapes real life, living in the world of her own imagination. Her mother is not on the scene, but Stella secretly phones her from a public phone box to talk about her life – her mother just says ‘the usual things’ to her. She’s an innocent, naive and impressionable, she’s troubled and confused, wanting to grow up quickly. She’s ready to fall in love and becomes obsessed by Meredith Potter, the company director, not realising he is simply not interested in her.

After playing a cameo role in Caesar and Cleopatra in the next production, Peter Pan, she ‘manages’ Tinkerbell, shining a torch and ringing a little handbell. The title is taken from Peter Pan, the play about the boy who never grew up, whose attitude to death was ‘To die will be an awfully big adventure.’ Bainbridge’s use of Peter Pan emphasises the themes of reality versus imagination, the loss of childhood innocence, and the quest for love. Stella, whose mother had abandoned her, is most upset by the scene in the play where Peter tells Wendy how his mother had forgotten him when he tried to go back home – the windows were barred and another little boy was in his bed. It’s her mother’s apparent lack of love for Stella that is perhaps the initial cause of what eventually happens.

Love in its various guises is a prominent theme running through the book. When Meredith asks her what she thinks J.B. Priestley’s play Dangerous Corner is about, she says: €˜Love. People loving people who love somebody else.’ And, indeed, An Awfully Big Adventure is about people who are in love with somebody else and they all have secrets to hide.

I was a bit confused by the opening chapter and it was only when I reached the end that I understood it, when the truth that had been hinted at became obvious. It really is an awfully good book.

7 thoughts on “An Awfully Big Adventure by Beryl Bainbridge”