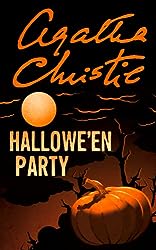 begins with the party given by Mrs Drake for teenagers. One of the guests, Joyce Reynolds, a boastful thirteen-year old, who likes to draw attention to herself, announces that once she’d witnessed a murder. It seems nobody believed her and yet later on she is found dead, drowned in the tub used for the bobbing for apples game – someone had believed her and had killed her. Mrs Ariadne Oliver was at the party and she asks Poirot to help in finding the murderer.

This is one of Agatha Christie’s later books, first published in 1969, when she was approaching 80, and although I did like it for the most part, it is certainly not one of her best. It’s not terribly coherent and it lacks focus in parts as several characters, not sharply defined, are introduced along with a lot of detail and repetition. The plot, as usual in Agatha Christie’s murder mysteries is convoluted with lots of red herrings and loose ends. I thought the revelation of one of the character’s parenthood at the end was just too contrived to be believable. There are meandering and critical conversations about the ‘young people today’ and the state of the mental health service, with overcrowded mental homes, which so many of the characters thought must be the cause of the murder.

… so doctors say “Let him of her lead a normal life. Go back and live with his relatives, etc. And then the nasty bit of goods, or the poor afflicted fellow, whichever way you like to look at it, gets the urge again and another young woman goes out walking and is found in a gravel pit, or is silly enough to take lifts in a car. (page 37)

So it is down to Poirot to discover the real motive, but not before there is another murder. He investigates the possibility that Joyce was telling the truth and asks retired Superintendent Spence, living in the area with his sister, for details of any local deaths and disappearances over the past few years.

Even though I found this book less satisfying than many of Christie’s other books there are things in it that I liked. The relationship between Ariadne Oliver and Poirot for one – Poirot has to have a sip of brandy to fortify himself for the ‘ordeal’ of talking to her:

‘It’s a pity,’ he murmured to himself, ‘that she is so scatty. And yet she has originality of mind. It could be that I am going to enjoy what she is coming to tell me. It could be -‘ he reflected a minute ‘- that it may take a great deal of the evening and that it will all be excessively foolish. Eh bien, one must take one’s risks in life.’ (page 20)

And for another there is the description of a beautiful garden in a sunken quarry,  a well designed garden with the appearance of being perfectly natural. There are several pages lyrically describing this garden, which seemed to me to reflect Agatha Christie’s own interest in gardens, particularly the gardens at her house in Devon, Greenway. Seeing this garden sends Poirot into an almost mystical state of mind as he absorbed the atmosphere:

It had qualities  of magic, of enchantment, certainly of beauty, bashful beauty, yet wild. Here, if you were staging a scene in the theatre, you would have your nymphs, your fauns, you would have Greek beauty, you would have fear too. Yes, he thought, in this sunk garden there is fear. (page 93)

Overall, there are some vivid descriptions in this book – the Hallowe’en party and some of the descriptions of the teenagers ’60s style clothing for example as well as the beauty of the sunken garden, which for me compensated for its flaws. But if you haven’t read any of Agatha Christie’s books I wouldn’t recommend that you start with this one.