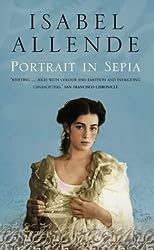 I picked up Portrait in Sepia up in a bookshop four years ago. As I knew nothing about it or the author it joined the other to-be-read books until just recently.

The opening pages of this historical novel grabbed my attention, about Aurora del Valle’s birth in 1880 in San Francisco in the Chinese quarter and referring to family secrets:

I have come to know the details of my birth rather late in life, but it would have been worse not to discover them at all, they could have been lost forever in the cracks and crannies of oblivion. There are so many secrets in my family that I may never have time to unveil them all: truth is short-lived, watered down by torrents of rain. (page 3)

Portrait in Sepia is part of a trilogy, with The House of the Spirits and Daughter of Fortune, and maybe it would have helped if I’d read the other two books, but I thought there was plenty of background history to the characters and I had no problem in following the story and distinguishing the characters.

Summary from the back cover:

After her mother dies in childbirth, Aurora del Valle is raised by her grandmother in San Francisco, but despite growing up in this rich and privileged environment, Aurora is unhappy. Haunted by terrible nightmares and the inexplicable absence of many of her childhood memories, and finding herself alone at the end of a love affair, she decides to travel to Chile to discover what it was, exactly, all those years ago, that had such a devastating effect on her young life.

Aurora is the narrator and this the story of her family and after giving details of her birth, Aurora goes back to 1862 beginning her story with details about her grandparents. This is not a book you read quickly as there is a lot of detail, a lot of 19th century history of Chile, its mix of nationalities, politics and wars – at first I felt I was drowning in detail, but once I settled into the rhythm of the writing I began to appreciate Allende’s style. It takes you right into the characters, seeing them through Aurora’s eyes – her Chinese grandfather, Tao Chi’en, her uncle Severo and her two grandmothers, Paulina and Eliza, who both play a large role in her life. And there are many other colourful characters and momentous events in this book.

It’s a book about love, loss, identity, betrayal and about family relationships. It’s a portrayal of the strengths and weaknesses of the characters and their struggle to survive. Aurora tells her family’s story through looking at photographs, snapshots in time, through her own disjointed, incomplete and vague memories of her childhood and through conversations with her family members. Whilst she was still very young her two grandmothers decided her future, thinking that time would erase the memory of the traumatic events she had seen, never realising that the scenes would live forever in her nightmares.

Portrait in Sepia explores the nature of memory, how each moment of our lives is so transitory and how the past becomes confused as we try to recapture the moments we’ve lived through. Through photographs we can keep memories alive. As Aurora discovered:

Every instant disappears in a breath and immediately becomes the past; reality is ephemeral and changing, pure longing. With these photographs and pages I keep memories alive; they are my grasp on a truth that is fleeting , but truth none the less; they prove that these events happened and that these people passed through my destiny. Thanks to them I can revive my mother who died at my birth, my stalwart grandmothers, and my wise Chinese grandfather, my poor father, and other links in the long chain of my family, all of mixed and ardent blood. (pages 303-4)

Reading a book like this inevitably leads me on to yet more books, because now I want to read the other two books in the trilogy.

5 thoughts on “Portrait in Sepia by Isabel Allende”