I read 9 books in November, all of them fiction. Two are books from my TBR shelves, one is a re-read, two are library books, three are books I’ve bought recently and one is a review copy. The links are to my posts on the books.

I’m always behind these days with reviews – so here are some brief notes about those books I haven’t reviewed:

The Woods by Harlan Coben – this was a free book on Kindle and as I hadn’t read anything by Coben I decided to see if I liked it. It”s a stand-alone mystery and I did like it. It’s fast paced, about the murder of two teenagers at a Summer Camp twenty years earlier – two other teenagers disappeared and were presumed dead. Paul Copeland, now a County Prosecutor, is asked to identify a dead body, who turns out to be one of the missing teenagers. His sister was the other missing person – is she still alive – and who was the murderer? Good characterisation and a good plot kept me guessing to the end.  A good choice.

I wasn’t too sure that I would like Sansom’s  Dominion, because

I’m not very keen on alternative history, but I was pleased to find that I enjoyed it more than I thought I would. It’s set in 1952 in a Britain that had surrendered to Nazi Germany in 1940 after Dunkirk. And I finished it with relief that this nightmare scenario had never actually taken place.

Germany and Russia are still at war, whilst in Britain an underground resistance organization headed by Winston Churchill, who is now in hiding, is alone in opposing Nazi authoritarian rule. The streets are patrolled by violent Auxiliary Police and British Jews are dragged from their homes and sent to camps awaiting transportation to the Isle of Wight on their way to gas chambers in the East. Sansom has painted a scary alternate Britain, showing how people are ground down, almost inevitably, into accepting the prospect of racial genocide and eugenic sterilisation. It sent shivers down my spine.

It is by no means a perfect book, it’s too long for example and I thought the ending was rather unconvincing, but I gave it 5 stars on Goodreads.  Maybe 5 stars is a bit generous but each time I had to stop reading I couldn’t get it out of my mind and was keen to get back to it. It’s the ‘what if’ aspect and Sansom’s account of the dangers of nationalism that made it compelling reading for me.

And finally Jane Eyre by Charlotte BrontÃ«.  I first read this many years ago and have since seen TV versions of it. This time round I was struck by Jane’s independence of mind, her powers of reasoning and strength of character. It’s not just the romantic love story I read as a young teenager. The romance is still there of course, but the feminism of Charlotte BrontÃ« expressed through Jane’s character is very evident to me now. I picked up the book as a result of visiting the BrontÃ« Parsonage Museum at Haworth, which I intend to write about some time.

My favourite, the one that I enjoyed the most, is Blue Heaven by C J Box. 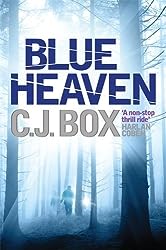