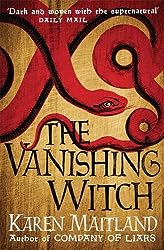 I found The Vanishing Witch by Karen Maitland a little slow at the beginning, although it’s full of interesting and well drawn characters, set in Lincoln during the reign of Richard II. It’s the time of the Peasants Revolt, a time of murder and mayhem and when suspicions of witchcraft were high as people started to die unnatural deaths, but it just didn’t have the magic spark that I’d enjoyed in her other books that I’ve read – The Company of Liars and The Owl Killers. It’s a long book of nearly 500 pages and it’s not just the beginning that’s slow, but it picks up towards the end.

The story revolves around Robert of Bassingham, a rich wool merchant, and his family – wife Edith and sons, Jan and Adam. All is fine until Robert meets Catlin, a wealthy widow, who comes to him for advice. Catlin is, of course, not as kind and good as Robert thinks she is and Robert’s family soon suffers because of his involvement with her. There are many other characters, including Gunter and his family. Gunter is a river boatman, struggling to make a living, burdened by heavy taxes he can’t pay. His life goes from bad to worse.

I liked the elements of the supernatural and suspicions of witchcraft in this book and the historical setting. There are several narrators, including a ghost and each chapter is headed by weather-lore, anti-witchcraft charms and spells taken from medieval ecclesiastical writings, recorded British folklore and from medieval spell books known as grimoires. For example this is the heading for Chapter 2:

If you fear that you are in the presence of a witch, clench both your hands into fists with the thumbs tucked under your fingers. Then she cannot enchant your mind.

Now that advice could be useful!

3 thoughts on “The Vanishing Witch by Karen Maitland”