September was a good month – we had a holiday in the Lake District, the sun shone and it’s been a dry September, according to the Met Office it was the driest September since records began in 1911!

And I read a fair number of books (the links are to my posts on the books), which brings my total for the year so far to 83. Four of the books are TBRs (to-be-reads) and six are crime fiction (marked with *):

I enjoyed all of them. It was a good month for reading crime fiction and my Book of the Month is also my Crime Fiction Pick of the Month. It’s … 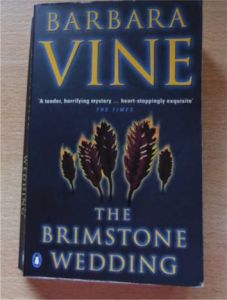 The Brimstone Wedding by Barbara Vine.

2 thoughts on “September's Books & Pick of the Month”