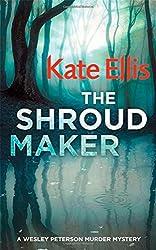 When I saw The Shroud Maker by Kate Ellis in the mobile library I thought I’d seen reviews of her books on other blogs, so I borrowed it. It is the eighteenth Wesley Peterson Mystery, but I think it reads well without knowing the background to the main characters. Although I suppose if I went back in the series I’d find that I know things that maybe I shouldn’t.

It’s the Palkin Festival in Tradmouth, a town in Devon, when the body of a strangled women is discovered floating out to sea in a dinghy. A year earlier Jenny Bercival had disappeared from the festival and her mother returns to look for her bringing with her anonymous letters claiming she is still alive. DI Wesley Peterson and his boss DCI Gerry Heffernan are investigating the two cases. Are they connected and is there a link to a fantasy website called ‘Shipworld’ which features the 14th century mayor and privateer of Tradmouth, Palkin as a supernatural hero with a sinister, faceless nemesis called the ‘Shroud Maker’?

When Wesley’s friend, archaeologist Neil Watson finds a skeleton on the site of Palkin’s warehouse, the question is whether an ancient crime has been uncovered, or is it Jenny’s body?

I liked the way the historical mystery intertwines with the modern one, through the archaelogical evidence, and the extracts from a 19th century biography of John Palkin written by his descendant, Josiah Palkin-Wright and letters from Josiah’s wife to her sister, worried about her marriage and that her sister does not reply. Kate Ellis’s style of writing is deceptively simple, so much so that the locations and characters came to life in my mind, whether it was Tradmouth in the past or the present.

There is plenty of mystery in this novel. I really had to concentrate to keep all the characters, red-herrings, twists and turns, and sub-plots in my mind. I thought I’d followed it as I read it, but now I’m not sure that I can give a clear account of what happened and why. However, as I do like complex mysteries I think I’ll have to look out for the first books in the Wesley Peterson series.

A note on the title:

From the title I thought that the ‘Shroud Maker’ would be a person who makes shrouds ie cloths used to wrap a body for burial, but that is not so in this book. Instead the name of ‘Shroud Maker’ is taken from a rope maker, shrouds being the ropes that support a ship’s masts. He or she is a mysterious figure, who in the Shipworld website appears as a faceless monster, wearing what looks like a white ski mask, a malevolent dark force.

It didn’t take me long reading this book to realise that ‘Tradmouth’ is an inversion of the name of Dartmouth in Devon and Kate Ellis’s note at the end of the book clarifies that. She refers to Geoffrey Chaucer, the author of The Canterbury Tales which features a character called the Shipman, a seaman from ‘Dertemouth’, who like her own invented character, was little better than a pirate. She writes that during the 19th century people were fascinated with the medieval period, perhaps as a reaction against industrialisation and her fictional writings of Josiah Palkin-Wright reflected that interest. And coming up to the present day she reflects that fantasy fiction is as popular today as it ever was, with the influence of J R R Tolkien’s works and fantasy fiction websites.

3 thoughts on “The Shroud Maker by Kate Ellis”