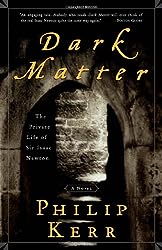 Dark Matter by Philip Kerr is a book from my to-be-read piles. I bought it at a library sale a couple of years ago now, attracted by the title. I soon realised that it is not about Newton, the mathematician and physicist because the sub-title is : The Private Life of Sir Isaac Newton. It is actually historical crime fiction, set in 1696 when Newton was the Warden of the Royal Mint at the Tower of London.

Christopher Ellis, the narrator of the book, is sent to the Tower to assist Newton to hunt down counterfeiters during the period of the Recoinage of the currency, when fake gold coins were being forged. This leads to the discovery in the Tower moat of the body of the former clerk of the Mint , followed by yet more murders. Newton at times seems remarkably like Sherlock Holmes in his powers of observation and deduction, as he and Ellis follow the trail of the murderers, involving tales of the missing treasure of the Knights Templars, (was the clue to its whereabouts in a book hidden in the Tower?), a difficult code to decipher, plots against Roman Catholics, astronomy and alchemy all thrown into the mix.

It’s very atmospheric, with shadowy London streets and back alleys; the Tower itself a centre of suspicion and intrigue. I liked the mix of fact and fiction. Titus Oates, Samuel Pepys and Daniel Defoe among others, make brief appearances, there’s the war with France and the mix of religion, science and politics that characterised the late 17th century. But I did find the characters, apart from Newton and Ellis confusing at times, having to backtrack a few times to sort them out. Newton himself is seen through Ellis’s eyes, a person who doesn’t like to speak  ‘anything that is extraneous to my business‘. But at times his sense of humour and wit, his dedication to his work, and his resolution of the science/faith conflict all come through.

I liked Dark Matter and reading it has certainly made me interested to know more about Newton, in particular about his religious beliefs. Although I’m happy to read this as fiction I wonder just how much is based on fact? In his Author’s Note, Philip Kerr explains that much is known about Newton’s work at the Royal Mint and that Christopher Ellis was in fact his assistant, following the mysterious disappearance of the previous clerk. As for his religious beliefs, Kerr writes:

Newton’s interest in alchemy, as well as his dissenting, not to say blasphemous, Arian view, which made him violently opposed to the ruling Trinitarian religious orthodoxy of the day, is also accurate. And anyone wishing to know more should read Richard Westfall’s magisterial biography of Newton, as I have done. But any mistakes in the novel are my own. (page 345)

And I also want to know did he really have a cat, and if so did he call it Melchior?

Although I didn’t read it just to fit in with several reading challenges I’ve joined, it is ideal for several and I’ve indicated those challenges in the Categories listed below this post.

Philip Kerr, is a Scot, born in Edinburgh. ‘He is the author of more than 20 books, including seven Bernie Gunther novels, several standalone thrillers, and six books in the young-adult series Children of the Lamp under the pen name of P.B. Kerr.

In 2009, he won the British Crime Writers’ Association Ellis Peters Historical Fiction Award and Spain’s RBA International Prize for Crime Writing for his Bernie Gunther series. A former advertising copywriter who released his first book in 1989 and in 1993 was named one of Granta magazine’s Best Young British Novelists, he now divides his time between London and Cornwall.’ (copied from his website)