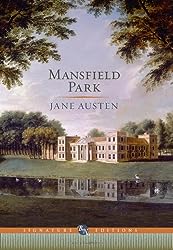 For years I’ve thought I’d read all of Jane Austen’s books, apart from Lady Susan/The Watsons/Sanditon, but then last year I wondered about Mansfield Park, and I realised I couldn’t remember much about it. At first I thought it was one of those books I must have read years ago and forgotten the detail. So, I thought I’d have a look at it again to refresh my memory, but when I looked for my copy I couldn’t find it and slowly I began to think I hadn’t read it at all and bought one. And, lo and behold it was totally new to me – I hadn’t even watched the TV version!

On the surface Mansfield Park is a simple story about a family and their relationships. Fanny Price, as a child of 10 goes to live with her wealthy aunt and uncle, Sir Thomas and Lady Bertram at Mansfield Park, where as the poor relation she is not treated badly, but not as cared for or as kindly as her cousins, but more as an unpaid servant dependent on the family for her welfare – a sort of Cinderella story.

But through the story, Jane Austen reveals the complicated interaction of society, shows the development of Fanny’s character and the depiction of a heroine who is good and gentle who matures throughout the novel. Fanny is an unassuming character who at first appears to be too self-effacing and timed, but who grows in strength of character. I think it’s a very clever portrayal because the reader sees things through Fanny’s eyes. Whilst at first I wanted to give her a shake and say pull yourself together, you’re being a doormat, I realised that Jane Austen was drawing a realistic portrait and waited to see how she would develop.

Like the other novels, Mansfield Park is full of detail of everyday life, its boredom as well as its entertainments and pleasures, the  balls and dinners. There is much in it about the houses and gardens, not only of the wealthy but also of the lower classes, such as Fanny’s parents home in Portsmouth – but they have servants themselves, so it is only comparative poverty. Seen mainly through Fanny’s eyes, it’s a study of morals, the damage caused by being unwanted and unloved.

There is, of course, so much more to say about this book – Mrs Norris’s snobbery, her obsession with  penny-pinching and her nasty, spiteful behaviour; the opinion of clergymen, seen through Mary Crawford’s mercenary eyes as she thinks about Edmund Bertram’s position; the flirty behaviour of the ‘charming’ Henry Crawford; the apparent coldness of Sir Thomas and his family’s distance from him; Lady Bertram’s languid life from her sofa; the disruption caused by the play and so on. There is also a gentle strain of humour and satirical observations about contemporary values, and even, with Mary Crawford’s pun on ‘Rears and Vices‘, a bawdy note.

Yes, I definitely like Mansfield Park and pleased it came up for me in the Classics Club Spin, which gave me the necessary push to read it in June.