Neil Gaiman is one of those authors I keep reading about on other book blogs and I’ve been meaning to check out one of his books for ages just to see for myself. I didn’t think his books were probably the sort I’d like as I rarely read children’s or Young Adult books. Then recently I saw The Graveyard Book on display in my local library, my eye was caught by the cover, and I was curious enough to find out what makes Gaiman such a popular author, encouraged by the blurb from Diana Wynne Jones declaring: ‘The best book Neil Gaiman has ever written.’ 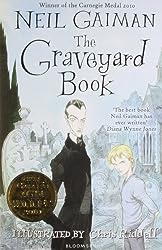 When I began reading I wondered if is this book really is for children – it’s so scary:

There was a hand in the darkness, and it held a knife. The knife had a handle of polished black bone, and a blade finer and sharper than any razor. If it sliced you, you might not even know you had been cut, not immediately.

The knife had done almost everything it was brought to that house to do, and both the blade and the handle were wet. (page 3)

The Graveyard Book won the Newbery Medal and the Booktrust Teenage Book Prize 2009, and was nominated for both the 2010 Carnegie Award and the Kate Greenaway Award.

Intrigued I read on and I was soon hooked into the story of the baby who escapes a murderer (the man Jack) intent on killing his entire family, and who stumbles into the local disused graveyard where he is rescued by ghosts. Think of The Jungle Book but with ghosts looking after the baby rather than animals – and Neil Gaiman acknowledges his debt to Rudyard Kipling’s book. And like The Jungle Book, The Graveyard Book is episodic. The baby, named by the ghosts, Nobody Owens, or Bod for short, grows up looked after by his adoptive parents Master and Mistress Owens who had been dead for a few hundred years and numerous other occupants of the graveyard.

I was fascinated by this fantasy, coming of age novel. Bod is given the Freedom of the Graveyard and educated by the ghosts, learning all sorts of strange and wonderful things, such as the ability to fade from sight. Silas, who is neither dead nor alive appoints himself as his guardian, helped by Miss Lupescu, who is not what she first appears to be. He is only safe if he doesn’t leave the graveyard and of course as he grows up that is what he really longs to do.

It’s creepy, but never gory. There are ghouls as well as ghosts, ancient ghosts predating Christianity, a particularly scary pre-historic tomb guarded by the slithering Sleer awaiting the return of the ‘Master’ and a young witch, Liza buried in the unconsecrated section of the graveyard. Needless to say, Bod has many adventures before his past catches up with him.

Apart from the fantastic characters, all of which I could easily believe to be ‘real’, the graveyard itself is so well described that I had no difficulty imagining what it looked like, so I wasn’t surprised to see in the Acknowledgements that Audrey Niffennegger had shown Gaiman around Highgate Cemetery West.  I like all the details of the epigraphs on the headstones – in particular Mother Slaughter’s headstone. It is so ‘cracked, worn and weathered that all it now said was: LAUGH – which had puzzled the local historians for over a hundred years.‘

The Graveyard Book is ultimately about life and death, love and friendship, loyalty and the fight between good and evil. There is humour, sadness and suspense. Above all it is about growing up and the excitement and expectations that Bod has about life:

Bod said, ‘I want to see life. I want to hold it in my hands. I want to leave a footprint on the sand of a desert island. I want to play football with people. I want’, he said, and then he paused and he thought. ‘I want everything.’ (page 286)

It is an ideal book for Carl’s Once Upon A Time VIII challenge (my 4th book). I’ll certainly read more of Neil Gaiman’s books.

15 thoughts on “The Graveyard Book by Neil Gaiman”