I wondered when I began to write this post whether to use the current title, And Then There Were None, for this book, but chose to use its original title, Ten Little Niggers as that is the title of my copy, a 1968 reprint of its first publication in the UK in 1939. Because of its offensive title it was first published in the US a few months later in 1940 as And Then There Were None. 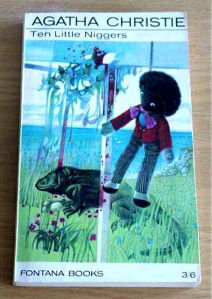 Description from the back cover:

10 people are invited to a fabulous mansion on Nigger Island off the coast of Devon. Though they all have something to hide, they arrive hopefully on a glorious summer evening… But soon a series of extraordinary events take place: the island is suddenly bathed in a most sinister light .. panic grips the visitors one, by one … by one… by one…

Eight people are invited to the island (based on a real island – Burgh Island off the south west coast of Devon). They are met by the butler and housekeeper/cook who explain that the owner, Mr Owen (U.N.Owen) has been delayed but has left instructions for their reception. In each of their rooms is a framed copy of the rhyme about the ten little nigger boys who all met their death. On their first evening they sit down to dinner in good spirits until, without any warning they hear a Voice accusing each of them (including the butler and housekeeper) of having caused the deaths or murdered a number of people. From that point onwards, one by one they are found dead, corresponding to the deaths in the rhyme and one by one a china figurine on the dining room table mysteriously disappears.

As the weather worsens they are stranded on the island and unable to leave or to get help from the mainland. Agatha Christie has created not only a ‘locked room’ type of mystery but also a mystery full of suspense, as the guests try to identify Mr U N Owen and become increasingly suspicious of each other. Their fear is further amplified by the house itself, which surprisingly is not an old Gothic house full of creaking wood and dark shadows –

But this house was the essence of modernity. There were no dark corners – no possible sliding panels – it was flooded with electric light – everything was new and bright and shining. There was nothing hidden in this house, nothing concealed. It had no atmosphere about it.

Somehow, that was the most frightening thing of all …

They exchanged good-nights on the upper landing. Each of them went into his or her own room, and each of them automatically, almost without conscious thought, locked the door … (page 52)

Despite their precautions the deaths continue, and each time no one sees or hears anything. I’d marked the page with the rhyme and kept flipping back to it to check how the next victim was going to meet with death, as I tried to work out who the murderer was and how he/she was able to carry out the murders unobserved. What makes it more tense for the reader (or at least for me) is the technique Agatha Christie makes of revealing the thoughts of the remaining characters, but without letting on who the thinker is.

In 1943 Agatha Christie adapted the book into a play, changing the ending, and there have been several film versions, none of which I’ve seen, so I didn’t know who the murderer was, although I knew the outline of the plot. Part way through the book I thought – ah, there is only one person who could be the murderer and I was right. I must re-read the book sometime to see if there were any clues, because if there were I missed them. My idea was based on the probability of that character being the murderer rather than any specific clues.

It is an ingenious mystery, revolving around the concepts of guilt and justice. There was no doubt that each of the victims had committed murder or caused/influenced the death of another person. But did the punishment fit the crime and could it ever be justified? As the murderer explains in an epilogue there were varying degrees of guilt among the victims and those whose guilt was lightest were killed off first!

This is possibly the most famous of Agatha Christie’s books. In her Autobiography Agatha Christie wrote that she had written the book because it was so difficult to do and the idea fascinated her. I found it fascinating too, but as an exercise and a puzzle rather than as a novel. Writing about the play and the book she stated:

I don’t say it is the play or the book of mine I like best, or even that I think it is my best, but I do think in some ways that it is a better piece of craftsmanship than anything else I have written. (page 489 of An Autobiography)