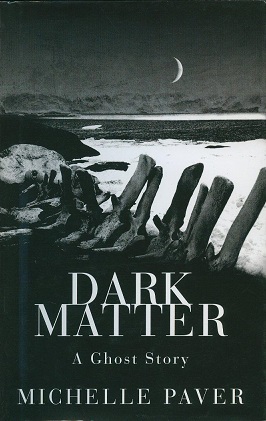 My first book for the R.I.P. VII Challenge is a chilling book, very chilling, both in the setting in the High Arctic and in atmosphere. I was glad I wasn’t reading Dark Matter by Michelle Paver in the dead of winter, snowbound and alone, because then it would have been terrifying. The isolation of the long, dark Arctic winter is oppressive and unrelenting.

It’s a ghost story in the form of a diary – that of Jack Miller who in 1937 was part of an expedition to the High Arctic to study its biology, geology and ice dynamics and to carry out a meteorological survey. Jack’s role is as radio operator, transmitting observations three times a day to the Government forecasting system.

From the start Jack is very reluctant to go, put off by the other members of the expedition, four ex-public schoolboys. But he’s stuck in a boring job, after giving up his plans to be a scientist and realises this is the only chance he’ll ever get to change his life. Right from the start things begin to go wrong, but Jack remains enthusiastic. Later when they meet Skipper Eriksson, the part owner and captain of the IsbjÃ¸rn taking them to Gruhuken, a remote uninhabited bay where they’re setting up camp, Jack begins to feel increasingly uneasy. Eriksson is reluctant to take them to Gruhuken, but he doesn’t explain why merely saying he doesn’t think it’s ‘right’ for a camp.

Not long after they have set up camp Jack feels oppressed by the isolation brought on by the thought of the men who had been there before them:

Suddenly, I felt desolate. It’s hard to describe. An oppression. A wild plummeting of the spirits. The romance of trapping peeled away, and what remained was this. Squalor. Loneliness. It’s as if the desperation of those poor men had soaked into the very timber, like the smell of blubber on the IsbjÃ¸rn. (page 65)

The trappers had left behind a ruined mine, a hut ‘crouched among the boulders  in a blizzard of bones‘ and in front of the hut a ‘bear post’ for luring bears to the trappers’ gun. It all makes Jack’s spirits sink. As the IsbjÃ¸rn is leaving the camp, Jack sees a man standing in front of the cabin by the bear post and is relieved when he leaves. Now the members of the expedition are alone with the huskies and Jack’s unease grows. He is disturbed by the change in the weather, the increasingly shorter days and irritated by the other members, in particular by Algie and his insensitivity and cruelty towards the dogs.

Jack’s unease turns into dread as he realises that Gruhuken may be haunted, but his rational mind explains his feeling as an echo:

An echo from the past. … it’s called ‘place memory’, a well-known idea, been around since the Victorians. If something happens in a place – something intensely emotional or violent – it imprints itself on that place; maybe by altering the atmosphere, like radio waves, or by affecting matter, so that rocks, for example, become in some way charged with what occurred. Then if a receptive person comes along, the place plays back the event, or snatches of it. … What I saw was only an echo. (pages 111-2)

As the darkness descends, Jack is left alone at the camp and his nightmare really begins. The book is well-paced, the tension mounts, and paranoia sets in … or is it real, even the dogs are scared. It really is a page-turner and a good old-fashioned ghost story. The relationships between the characters are well drawn, and especially Jack’s relationship with Isaak, one of the huskies. I was most concerned about Isaak!

Jack describes ‘dark matter‘ of the title, as that part of the universe that cannot be seen or detected, but is there. He finds this idea

‘… unsettling. Or rather, not the idea itself, that’s merely an odd notion about outer space. What I don’t like is the feeling I sometimes get that other things might exist around us, of which we know nothing.’ (pages 94-5)

6 thoughts on “Dark Matter: a Ghost Story by Michelle Paver”