I’d planned to read Naming the Bones by Louise Welsh, which is from my to-be-read books and it seemed appropriate to include it in the books I’ve selected for the RIP IV Challenge. But as I read it I began to wonder if it really fitted into that category. Although the blurb on the back cover says it is ‘Loaded with Welsh’s trademark wit, insight and gothic charisma‘ the gothic elements are not evident in the first half or so of the book. It’s only as the story unfolds that the mystery element emerges and just a touch of the gothic and the occult comes to the fore. 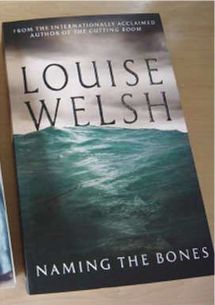 I found it a slow start as Dr. Murry Watson, an English literature professor from Glasgow University researches the life of a largely unknown poet Archie Lunan. Lunan had died thirty years earlier, presumed drowned off the island of Lismore, although his body had never been discovered. As Murray investigates Lunan’s life, talking to people who had known him, he begins to suspect that Archie’s death may not have been the suicide it seemed and as more deaths come to his attention the mystery grows and becomes more sinister.

Murray’s personal life is in a mess; his relationship with his brother has broken down following their father’s death and his work life is complicated by his affair with his boss’s wife. This is a detailed book, the characters are vivid and memorable and  each location is beautifully described, not only the sights and sounds but smells too:

Murray pulled back his hood. The scent of wood smoke mingled with the falling rain and the damp rising from the sodden earth. It was an ancient smell, the same one the earliest islanders who could be resting, preserved beneath the peat, had known a millennia or so ago. (pages 327-8)

It is when Murray arrives on the island of Lismore in Loch Linnhe on the west coast of Scotland that the pace picks up, and the tension builds. Here Murray finally meets Archie’s girlfriend, Christie and begins to piece together what had happened thirty years ago. The book ends with some ambiguities still to be explained, an ending which I found perfectly in keeping with the story.

I was taken with Welsh’s handling of biography, describing it as

… a paper facsimile of life hurtling towards death. (page 128)

Murray is hoping to discover how much Archie’s life had influenced his art, whereas his former tutor, Professor James, had insisted on the importance of divorcing writers’ lives from their work, thinking it to be reductive and simplistic. It is the work itself that is important and Murray wonders whether this is right and whether he should limit himself to a discussion of the poetry, rather than the man. Again Welsh leaves this open to the reader to decide.

Naming the Bones isn’t the book I thought it was going to be – it isn’t really ‘gothic’, or dark, or about the occult. It isn’t really crime fiction, either. Nor is it anything like the only other book by Louise Welsh that I’ve read – The Cutting Room, which is really gothic and dark. Once I’d got over my expectations I enjoyed the book for what it is – a mystery and a good one too.

5 thoughts on “Naming the Bones by Louise Welsh: A Book Review”