H is for Hardy 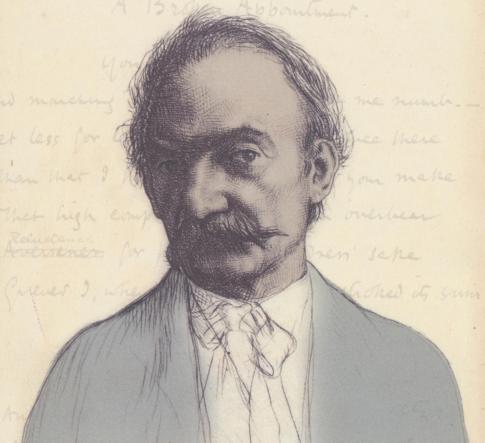 Thomas Hardy is one of my favourite authors. He was born in 1840 at Upper Bockhampton near Dorchester. What I love most about Hardy’s books are his lyrical descriptions of nature and the countryside and all his books show his great love and knowledge of the countryside in all its aspects. They also show his almost pagan sense of fate and the struggle between man and an omnipotent and indifferent fate. Hardy was a pessimist – man’s fate is inevitable, affected by chance and coincidence. It cannot be changed, only accepted with dignity. This is illustrated in his poem – Hap, written in 1866:

If but some vengeful god would call to me

From up the sky, and laugh: ‘œThou suffering thing,

Know that thy sorrow is my ecstasy,

That thy love’s loss is my hate’s profiting!’

Then would I bear, and clench myself, and die,

Steeled by the sense of ire unmerited;

Had willed and meted me the tears I shed.

But not so. How arrives it joy lies slain,

And why unblooms the best hope ever sown?

And dicing Time for gladness casts a moan’¦.

These purblind Doomsters had as readily strown

Blisses about my pilgrimage as pain

The first book by Thomas Hardy that I read was The Trumpet Major – I think it was in the second year at secondary school. I remember very little about it, except that it was set during the Napoleonic Wars and I wasn’t too impressed. Then I read The Mayor of Casterbridge for A level GCE and thought it was wonderful.

I still have my copy, with passages underlined and notes at the tops of pages – all in pencil.It’s full title is The Life and Death of the Mayor of Casterbridge: A Story of a Man of Character. It tells the tragic tale of Michael Henchard, a man of violent passions, proud, impulsive with a great need for love. It opens dramatically as he sells his wife and child to a sailor at a fair. By his own hard work over the years he eventually became the rich and respected Mayor of Casterbridge. But then the re-appearance of his wife and her daughter sets off a train of events finally bringing Henchard to ruin and degradation.

Because I enjoyed The Mayor over the years I’ve read more of Hardy’s books, including Tess of the D’Urbervilles and Jude the Obscure, both dramatic tragedies. In Jude Hardy attacked the Church and the marriage state, which received a mixed reception at the time – the Bishop of Wakefield burned his copy of the book and W H Smith withdrew it from their circulating library, but the public bought 20,000 copies, whether or not due to the scandal it aroused.  These books were considered masterpieces by some and scandalous by others.

Of the two I prefer Jude to Tess and having re-read them both more recently I still feel the same, but now I’m less impatient with the way Hardy presents Tess as a helpless victim than I had been before.  She is an innocent, raped by Angel Clare, the man she loves and Hardy highlights the hypocrisy of the times in condemning the ‘fallen woman’.

In Thomas Hardy, the Time-Torn Man Claire Tomalin writes not only about his life but also how he became a writer, poet and novelist. I began reading this book a few years ago and every now and then think I really must finish it. I stopped, as usual, overtaken by the desire to read other books- including more by Hardy himself.

The Thomas Hardy Society is an excellent source of information on the man and his works.

This is an ABC Wednesday post for the letter H.