After writing so many times that I want to re-read Pride and Prejudice I decided it was time to do so,   And as other people have also said the same, or indeed, said that they have never read it, I thought it appropriate that today’s teaser should be from Pride and Prejudice. Here is Mr Darcy thinking about Elizabeth’s eyes:

Mr Darcy had at first scarcely allowed her to be pretty; he had looked at her without admiration at the ball; and when they had next met, he looked at her only to criticise. But no sooner had he made it clear to himself and his friends that she had hardly a good feature in her face than he began to find it was rendered uncommonly intelligent by the beautiful expression of her dark eyes. 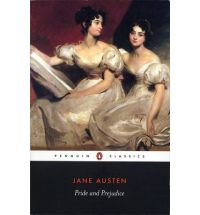 Teaser Tuesdays is hosted by Mizb – the idea is to quote two or three sentences from a book you’re currently reading to entice other people to read it, without giving away any spoilers. I am spoilt for choice reading Pride and Prejudice, so here are another couple of sentences. This is a snippet of conversation between Mr and Mrs Bennet:

“When a woman has five grown-up daughters, she ought to give over thinking of her own beauty.”

“In such cases a woman has not often much beauty to think of.”