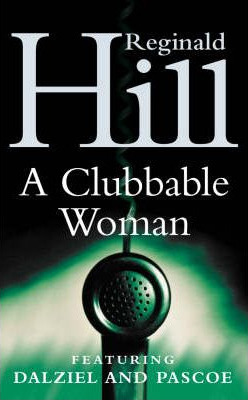 A Clubbable Woman came out in 1970. It was Reginald Hill’s first published book and the first book featuring Dalziel and Pascoe. I borrowed this book from the library and read it very quickly last week. At times I thought I knew the story as I’ve watched practically all the Dalziel and Pascoe episodes on TV but I couldn’t remember how it ended.

Connon, known as Connie, was set to play rugby for England before an ankle injury ended his career. He is no longer Wetherton Rugby Football Club’s star player but he still plays occasionally. After a match in which he returns home dazed and confused after a blow (was it deliberate?) on the head he finds his wife, Mary watching television, leaving him to get his own meal. Feeling sick he goes upstairs, then passes out. Later he realises that she is still downstairs, apparently still watching the television – then he discovers that she is dead, with a hole in the middle of her forehead.

Dalziel and Pascoe investigate the murder. Dalziel who is a member of the rugby club is on his home ground and knows all the players.  Has Connon killed his wife suspecting that she had been unfaithful? Or could someone at the club have it in for the rugby star and his family? As the mystery unravels, I was just as interested in the characters of Dalziel and Pascoe as in identifying the murderer. My image of Dalziel is inevitably formed on Warren Clarke’s portrayal of him and this fits well with Reginald Hill’s description:

Superintendent Andrew Dalziel was a big man. When he took his jacket off and dropped it over the back of the chair it was like a Bedouin pitching camp. He had a big head, greying now; big eyes, short-sighted but losing nothing of their penetrating force behind a pair of soild-framed spectacles; and he blew his nose into a khaki handkerchief a foot-and-a-half square. … Dalziel sank over his chair and scratched himself vigorously between the legs. Not absent-mindedly – nothing he did was mannerism – but with conscious senuousness. Like scratching a dog to keep it happy, a constable had once said within range of Dalziel’s very sharp hearing. He had liked the simile and therefor ignored it.

He is passionate about rugby and Pascoe (then a Sergeant) responds “with the resigned condescension of one certain of the intellectual superiority of Association Football.” Pascoe’s thoughts about the investigation and about Dalziel are scattered throughout the book:

Do I want to amuse Dalziel? And if I do, is it to keep him sweet so I can manipulate him, like I pretend? or is it because he puts the fear of God into me? Just how good is he anyway? Or is he just a ruthless sucker of other men’s blood?

He calls him “Uncle Andrew”, “Randy Andy” and “Bruiser Dalziel lecturing me on tact and diplomacy. It was like Henry the Eighth preaching about marital constancy”. Pascoe’s degree is the butt of Dalziel’s jokes and Pascoe is offended by Dalziel’s lack of organization. He learns that Dalziel was divorced and his wife had gone off with a milkman, fifteen years earlier. Despite being two such diametrically opposed characters you can trace the growing bond between Dalziel and Pascoe and by the end of the book Pascoe finds himself cast in the role of Dalziel’s confidant and even becoming enthusiastic over a game of rugby.

Reginald Hill has written many Dalziel and Pascoe novels, enough to last me for years. I’ve only read three so far and I’m not going to try to read them in the order they were written, but I’ll be looking out for more of them from now on.

5 thoughts on “A Clubbable Woman by Reginald Hill”