‘The number of women my brother Matthew killed, so far as I can reckon it, is one hundred and six…’ 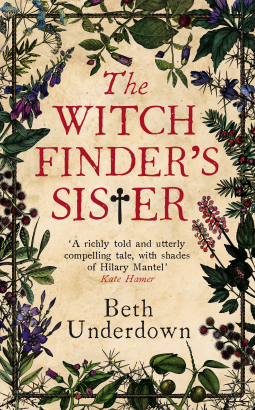 1645. When Alice Hopkins’ husband dies in a tragic accident, she returns to the small Essex town of Manningtree, where her brother Matthew still lives.

But home is no longer a place of safety. Matthew has changed, and there are rumours spreading through the town: whispers of witchcraft, and of a great book, in which he is gathering women’s names.

To what lengths will Matthew’s obsession drive him?
And what choice will Alice make, when she finds herself at the very heart of his plan?

Based on the true story of the man known as the Witchfinder General, this exquisitely rendered novel transports you to a time and place almost unimaginable, where survival might mean betraying those closest to you, and danger lurks outside every door.

When I read the description of The Witchfinder’s Sister by Beth Underdown I was immediately drawn to the story based on the life of the 1640s witchfinder Matthew Hopkins. As well as a good story it is a fascinating look at life in England during the Civil War, set in 1645, a time of great change and conflict in politics, religion and philosophical ideas, coinciding with a growth in the belief in witchcraft.

I enjoyed it immensely. It’s historical fiction that combines fact and fiction, told through the eyes of Matthew’s sister, Alice, a fictional character. Beth Underwood has researched and used the historical sources so well. What is so chilling about this book is that the events it describes really did happen.

There is a glossary at the end of the book describing, among other terms, the methods used to investigate women accused of being witches, such as ‘searching‘ where their bodies were inspected for ‘teats’, ‘swimming‘, an ordeal by water in which women were bound and lowered into a pond or river; they were innocent if they sank, and ‘watching‘ in which a suspected woman would be tied to a stool in the middle of a room, kept awake and observed for hours. Women were treated in this way if they were accused of causing harm to their neighbours for such things as the death of a neighbour’s horse or for the unexplained deaths of children. For the superstitious every sudden death, or accident, every miscarriage or illness, was considered to be caused by witchcraft.

There is a pervading sense of fear and terror as Alice discovers what Matthew is doing, intensified when he forces her to help with his investigations, travelling throughout Essex. She tries to stop him, but fearful of him accusing her mother-in-law, Bridget, she has to go along with him. She also discovers family secrets about their parents and Matthew’s birth. The witch hunts escalated as grief-stricken and angry women accused other women and their names were added to Matthew’s list. After his investigations the women were then sent to prisons to await their trials.

It is clear that the women accused were vulnerable, often widows living isolated lives, some suffering with what we would consider to be a mental illness, with no male family members to keep them safe from persecution. Matthew’s own mother showed signs of mental illness, subject to many strange habits and obsessive compulsive behaviour. But Matthew is unable to accept the facts and grows ever more fanatical.

It all hangs together as a piece of fiction, with clearly described and defined characters, making their feelings and actions perfectly believable – even Matthew comes across as a well-rounded character – and set against the background of a country in the midst of civil war. It makes harrowing reading and I found it deeply moving.

I grew very fond of Alice and her maid Grace but was appalled by the final twist at the end of the book.

Beth Underdown lectures in Creative Writing at the University of Manchester. The Witchfinder’s Sister is her first novel.

My thanks to the publishers and NeGalley for my copy of this book. It is to be published on 2 March 2017.