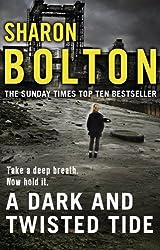 I’ve recently read Dead Scared, Sharon Bolton’s  second Lacey Flint book and Like This, For Ever, the third book in the series:

Someone is watching you…

When a Cambridge university student dramatically attempts to take her own life, DI Mark Joesbury realizes that the university has developed an unhealthy record of young people committing suicide in extraordinary ways.

Psychiatrist Evi Oliver is the only person in Cambridge who knows who Lacey really is – or so they both hope. But as the two women dig deeper into the darker side of university life, they discover a terrifying trend…

And when Lacey starts experiencing the same disturbing nightmares reported by the dead girls, she knows that she is next.

Like This, For Ever (published as Lost in the US)

Twelve-year-old Barney Roberts is obsessed with a series of murders. He knows the victims are all boys, just like him. He knows the bodies were found on river banks nearby. And he’s sure the killer will strike again soon. But there’s something else, a secret he’d rather not know, a secret he is too scared to share . . .  And who would believe a twelve-year-old boy anyway?

Like This, For Ever is a twisty, addictive, up-all-night thriller from a writer who loves nothing more than to play with your mind.

Two perfect books for the RIP Challenge. they are both totally absorbing murder mysteries – maybe Like This, for Ever is even better than Dead Scared. I did have an inkling quite early on who was pulling Lacey’s strings in Dead Scared, but I just didn’t know how it was being done – nightmares, hallucinations, bizarre suicides and vulnerable students. It is terrifying in parts.

With Like This, For Ever I had no idea until very near the end who the killer was. It’s so full of red herrings and twists (more than in Dead Secret) that I swung from believing it could be this person to that, or thinking it can’t possibly be that person, or I do hope it’s not that one. It was one of the people I thought maybe it’s that one, but I quickly dismissed that idea.

Both books are full of believable and individual characters, plus there is the ongoing story of Lacey, her boss Mark Joesbury and psychiatrist Evi Oliver. I’d love to read the next book in the series soon – A Dark and Twisted Tide.

I first read Sharon Bolton’s books when she was writing under the name SJ Bolton, and I wondered why the name change.  The answer is here in this post on her blog . It’s long, so I’ll summarise – ‘SJ Bolton’ was the name her publishers suggested in 2006 in the manner of PD James and JK Rowling and she went along with it, the thinking being that men don’t buy books by a woman author. But she doesn’t have a middle name and chose ‘J’, confusing for people who knew her personally , and then more SJs appeared on the book shelves and she felt lost in the crowd. There was also the issue around the name ‘Sharon’, a name that can conjure up images of Pauline Quirke slouching around Chigwell in a shell suit. So  she now writes as Sharon Bolton and I for one am glad she does – it’s less anonymous as well as being a much more memorable name.

As well as being perfect for the RIP challenge, Dead Scared is a book I’ve owned for a while and so qualifies for the Mount To Be Read Challenge.