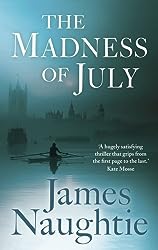 When I began reading The Madness of July I was immediately drawn into the story. I used many markers as I read it because it has such a complicated plot. It’s a political thriller set in London in the mid 1970s one sweltering July as Will Flemyng the foreign office minister and former spy finds himself drawn back into the world of espionage, a world of deception, manipulation and diplomacy. It’s the Cold War period and Will discovers politics can be just as dangerous as espionage.

I really wasn’t sure what was going on at first, not sure what was relevant for me to remember and understand, not even sure who was who as the narrative switched between London, New York, Washington and the Highlands of Scotland. So there were times when I had to backtrack when I came across a character or an event, that turned out to be important to the story, which I hadn’t realised earlier on. The characters know what has gone before, know each other, know what they are talking about – but we don’t.

In a different book this would be a major drawback – in this book it is necessary. It’s as though we’re peering through the fog, until gradually the fog lifts and things become clearer. Or it’s like beginning a cryptic crossword where you have all the clues and no idea about the answers. Anyway, I loved it. If the content isn’t too clear at first the writing is, Naughtie uses beautiful imagery and the characters are vividly drawn, in particular the part set in Scotland at Altnabuie, the Flemyngs Highland estate:

At Altnabuie, they woke to a trembling dawn. Flemyng had raised his bedroom window before turning in, and when he opened his eyes, very early, he could smell the highlands. There was a edge to the warmth and the damp, and the tang of tree and field lured him on. He looked towards the loch and saw swirls of mist rising up in thin pillars, like the guilty secrets of hidden smokers, leaving a thin topping of white cotton on the water that crept over the surface and was beginning to disperse here and there with the coming of a soft breeze. It would be gone within the hour. The herons were on their favourite stone, prim and still like a pair of disapproving clerks. The crows cawed in the woods beyond, and behind him, on the eastern side of the house where the sun was already giving life to the place, he could hear the cockerel at work. Everything was crisp and clean, the stifling urban fog a world away. (page 173)

The events that July take place over just 6 days. An American, Joe Manson dies, apparently of an overdose and is found in a store cupboard (it was a large one full of boxes and all sorts of spare objects) in the House of Commons – except that as the House is technically a royal palace deaths are not allowed and bodies have to be discreetly removed and ‘expire’ elsewhere. And thus begins a political crisis – who was Manson, how did he die, what did he know, what had he said – and to whom? And there is a letter on House of Commons notepaper that Will found on the photocopier – an anonymous letter that is puzzling him, a letter from someone who is desperate and who feels he/she is being driven insane.

A secondary plot, but to my mind just as interesting, maybe even more so, concerns Will and his family. He has two brothers, an older on, Mungo who lives at Altnabuie, and a younger one, Abel, who goes by the name of Grauber, their mother’s maiden name, and lives in New York. Mungo has been researching their family history and has discovered a secret about their mother that he finds disconcerting, even frightening.

And the madness? At one point Flemyng, talking about politics says that the rules of the game mean that you have to behave irrationally. A point is reached where you invited destruction, he’d said, as if it were inevitable. ‘Maybe madness isn’t an aberration, but the natural end to our game.’ Everyone aspired to it in politics, even if they didn’t recognise it for what it was. (page 110)

Madness has been haunting Flemyng: Because in these corridors – balance and rational though we believe ourselves to be – there’s madness on the loose. (page 326)

If you like a quick easy read, then The Madness of July is not the book for you. It, however, like me, you like a book that makes you think, that keeps you on your toes as you read, that both puzzles and entertains you, then you’ll probably enjoy it as much as I did.

James Naughtie (pronounced Nochtee, or ‘“ /ËˆnÉ”Ëxti/ as it is given in Wikipedia, which doesn’t mean anything to me) is a British radio and news presenter for the BBC. From 1994 until 2015 he was one of the main presenters of Radio 4’s Today programme. He is now a ‘Special Correspondent’ with ‘responsibility for charting the course of the constitutional changes at the heart of the UK political debate’, as well as the BBC News’s Books Editor, contributing a book review to the Saturday morning editions of Today. The Madness of July is his first novel. He has also written books on politics and music. He was born in Aberdeenshire and lives in Edinburgh and London.

His second novel, Paris Spring, also featuring Will Flemyng, is due to be published in April this year.

Reading Challenge: Read Scotland 2016 and What’s in  Name? 2016 – in the category of a book with a month of the year in the title.

Then – I’m  beginning this post with the book I’ve recently finished reading – Doctor Thorne (see this post for my review). Julian Fellowes’ adaptation of this book is currently on ITV and I was in two minds about watching it, but I thought I’d at least watch the first episode. However, as I expected, there are too many changes from the book for me to enjoy watching it. It is so condensed, and too much is revealed too early, so I have decided not to watch the next two parts.

Now and Next – After finishing Doctor Thorne I couldn’t decide what to read next and began reading three books. This happens to me sometimes and I expect I’ll soon concentrate on just one of these books and go back to the others later.

Blurb: Leys Physical Training College was famous for its excellent discipline and Miss Lucy Pym was pleased and flattered to be invited to give a psychology lecture there. But she had to admit that the health and vibrant beauty of the students made her feel just a little inadequate.

Blurb: ‘He was sickened also with all these lies. His very soul was dismayed by the dirt through which he was forced to wade. He had become unconsciously connected with the lowest dregs of mankind, and would have to see his name mingled with theirs in the daily newspapers’

Mark Robarts is a clergyman with ambitions beyond his small country parish of Framley. In a naive attempt to mix in influential circles, he agrees to guarantee a bill for a large sum of money for the disreputable local Member of Parliament, while being helped in his career in the Church by the same hand. But the unscrupulous politician reneges on his financial obligations, and Mark must face the consequences this debt may bring to his family.

Blurb: From Radio 4’s James Naughtie, a sophisticated thriller about loyalty, survival and family rivalry deep in the Cold War, drawing on decades of experience as a political insider in Westminster and Washington.

It is a sweltering July in the mid-1970s, and for Will Flemyng, foreign office minister, the temperature is rising with each passing hour. A mysterious death has exposed secret passions in government, bringing on a political crisis that will draw him back into a familiar world of danger and deceit.

For Flemyng has a past. He was trained as a spy for a life behind enemy lines and now he’s compelled to go back. In the course of one long weekend he must question all his loyalties: to his friends, his enemies, and to his own two brothers. Only then can he expose the truth in London and Washington. When he has walked through the fire.

And I’m still slowly making progress with SPQR by Mary Beard, the Kindle edition (I read some of this every day).

Blurb: Its history of empire, conquest, cruelty and excess is something against which we still judge ourselves. Its myths and stories – from Romulus and Remus to the Rape of Lucretia – still strike a chord with us. And its debates about citizenship, security and the rights of the individual still influence our own debates on civil liberty today.

What are you reading this week – and have you read any of these books? Do let me know.